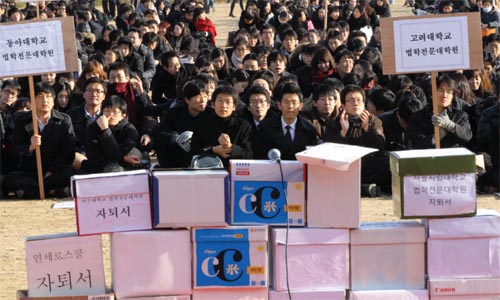 Thousands of students attending law schools nationwide protest yesterday in front of the Government Complex, Gwacheon, Gyeonggi, against the Ministry of Justice’s consideration of reducing the pass rate for the law school certification test. The Roh Moo-hyun government had promised to pass 80 percent of law school students. [YONHAP]


The Ministry of Justice announced yesterday that it will lower the pass rate to 75 percent from 80 percent for the law school certification test. The change will be effective in 2012.

Controversy over the pass rate started when the Korean Bar Association insisted that the ministry lower the pass rate to 50 percent, which brought harsh criticism from students attending law schools around the country.

About 3,000 law students protested in Seoul yesterday over the Korean Bar Association’s proposal to change the certification rules, just as the test results are to be announced Friday.

There are 3,827 students now attending law schools nationwide, with 2,000 set to graduate on Friday. But the bar association said it wanted the pass rate be reduced to 50 percent.

The Ministry of Justice held a management committee meeting yesterday to discuss revising the pass ratio.

But since then, the Korean Bar Association, which represents the rights of Korean lawyers, has raised questions over whether the schools actually nurture more qualified lawyers.

Student anger was provoked when the association suggested dramatically lowering the pass rate at a meeting with Ministry of Justice in November, insisting that too many lawyers in the market could lead to low quality of service.

But Kim Hyeong-ju, leader of an ad hoc law students’ organization, said the concerns had been fully scrutinized before the schools were established.

“When [the Roh] administration decided to found law schools, it said about 2,000 lawyers [per year] would be appropriate for the market,” Kim said.

“If the government were to lower the pass rate, most students at law schools would concentrate on the test only, not on learning any other abilities, which is against the original purpose of law schools - to nurture lawyers with various kinds of experiences and knowledge.”

Kim added that poor curriculums and the newness of the teaching system, which many lawyers have criticized, should be improved by senior lawyers. “It is not our fault that the law schools have a poor education system,” Kim said. “The senior lawyers should help resolve the problem, not block their juniors from becoming lawyers.”

The Korean Bar Association, however, continues to stress the importance of quality lawyers. An association official pointed to the fact that law schools currently have low retentions rates, indicating that a 50 percent pass rate would not be too low.