Lee proves himself as one of top forwards

Lee proves himself as one of top forwards 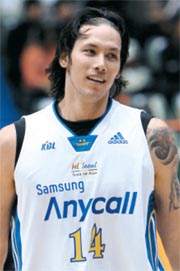 Lee Seung-joon of the Samsung Thunders was considered overrated by many in his rookie season. But he is establishing himself as one of the top forwards in the league with his improved defensive play this season.

Lee was drafted second overall in the inaugural half-Korean draft last year by the Samsung Thunders. But it was the third overall pick, Moon Tae-young of the LG Sakers, who led the league in scoring. First overall pick Jeon Tae-pung of the KCC Egis struggled at times but played well in the postseason to lead his squad to a runner-up finish.

Lee, on the other hand, underperformed in his rookie season. He was considered an overhyped player who failed to utilize his size. Things have changed this season as Lee looks to have finally adjusted to the KBL. Lee is averaging 15.5 points and 8.2 rebounds this season. The numbers are not huge improvements over his averages last season of 15.3 points and 7.1 rebounds, but he has improved his positioning in the low post as well as his defensive play.

In his rookie season, Lee had trouble battling for positioning and boxing out his opponents in the low post, but he is fully utilizing his height - 206 centimeters (6 feet 8 inches) - and weight, 105 kilograms (231 pounds), this season. In the Dec. 4 win against Dongbu Promy, Lee grabbed a key rebound in the fourth quarter to help his team to a 74-70 win.

With Lee providing a stable low-post presence, opposing teams have had trouble penetrating Samsung’s defense, settling for perimeter shots in many instances. In Tuesday night’s game against KGC, Lee limited his opponents to 31 percent in terms of field goals and added 22 points and 13 rebounds in the process to help his team to a 74-61 win. Both were season highs for Lee, and Samsung now sits a half-game back of the league-leading ET Land Elephants with a record of 12 wins and 4 losses.

“He has improved his ability to read opposing teams and the flow of games,” said Samsung head coach Ahn Joon-ho. “Since he concentrates on doing the dirty work like playing defense and grabbing rebounds, it naturally leads to double-digit scoring figures.”

In contrast, Moon and Jeon have yet to play instrumental roles for their teams this season. Moon, who averaged 21.9 points per game, is averaging a respectable 20.9 points. Jeon’s scoring average has dropped from 14.4 points per game to 13.7 points per game, but he has improved his assists average form 4.7 to 5.1 this season. However, the two have yet to deliver clutch plays in key situations. The LG Sakers and KCC Egis currently sit sixth and seventh in the league standings, respectively.

“Moon Tae-young and Jeon Tae-pung have been hampered a bit by opposing teams’ tendencies to prioritize their defense on stopping Moon and Jeon on offense,” said Choo Il-seung, an MBC Sports color commentator.