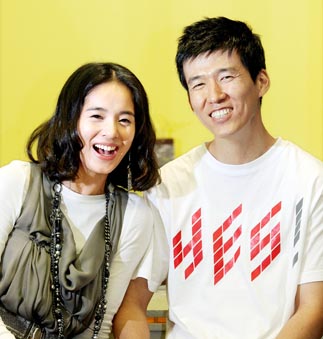 Jung Hye-young and Sean Ro say that making a donation is something that everyone can do, whether it’s 100 won or 100 million won. The couple makes regular contributions to a variety of charities. [JoongAng Ilbo]

It’s one thing to talk about sharing the wealth, but it’s another thing entirely to actually do it. Celebrity couple Sean Ro, whose real name is Ro Seung-hwan, and Jung Hye-young have been giving their money away on a regular basis since they wed six years ago.

Ro, who is a rapper, and Jung, an actress, are famous for their annual ritual of donating 3.65 million won ($3,318) every October to celebrate their wedding anniversary. They save 10,000 won every day, and when the amount reaches 3.65 million won they give it to a charity that supports the homeless.

But their philanthropic spirit doesn’t end there.

The couple sponsors about 100 children in developing countries through Compassion Korea, a Christian charity. And instead of throwing parties to celebrate the first birthdays of each of their children - a significant event for Koreans - Ro and Jung donated the money they would have spent to a variety of charities. They also lead a Happy Family campaign, through which they fund wedding ceremonies for couples that can’t afford them on their own.

In June, netizens ranked the couple No. 1 among celebrity role models. The JoongAng Ilbo sat down with Ro and Jung to talk about their philosophy on sharing wealth.


Q. You were recently chosen as promotional representatives for Compassion Korea. Tell us about your relationship with the charity.

A. Ro: The first time I got to know Compassion Korea was in the summer of 2005. That was around the time when my wife and I had our first child. Everyone stresses the importance of early education, so I was thinking about what I could do for our unborn child. I decided I wanted her to learn what love is. So we sponsored three children overseas. One for me, one for my wife and one for my first child.

So how did you end up sponsoring more than 100 children?

We had originally planned to have four children. So we decided to support three more children, even though we only had one child at the time. [Ro and Jung now have three children.] The crucial moment came in May 2008 when my wife went to the Philippines to meet one of the children we were supporting. She realized that our monthly donation of 45,000 won had changed the life of one small girl. That was when we decided to give up buying our own house and keep donating.

But it must be difficult to help others.

Right. I always thought about helping others but it was hard to put my ideas into action. When I was working as a member of Jinusean [a hip-hop duo that was popular in the 1990s], I would donate money if I had much more than I needed. It was just a one-time donation. But when I settled down, I asked myself what would make us a happy family. My answer was sharing what we had.

Did your wife agree with the idea?

What do you think about people who are suspicious of your intentions?

Ro: I know there are some people like that. About six years ago, there were more people who were suspicious about our motives, but now people know we’re not doing this to impress others.

What is your definition of sharing?

It’s something everyone can do. Everyone says they will start making donations when they become richer, but I don’t think that’s right. There are all different types of sharing. You can donate just a single 100 won coin or 100 million won.

What do you hope for your children?

I hope they will grow into people who make their neighbors happy.