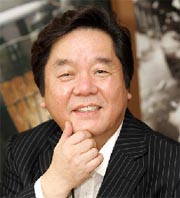 Comedian-turned-film-director Shim Hyung-rae, one of the living legends of Korean comedy, is making a very brief return to television.

He will be a guest on the holiday episode of “Gag Concert,” the KBS sketch comedy show, on Dec. 26.

Although there were reports that Shim would make a more permanent return to the show, the program’s chief producer said talks are ongoing.

“We have talked with Shim about making a comeback to TV comedy, but there are no final plans as of now,” chief producer Park Jung-min was quoted by OSEN, an online sports and entertainment news agency, as saying on Tuesday. “He did say that he will make his best effort to return as a comedian.”