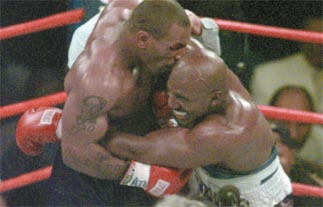 CANASTOTA, New York - Mike Tyson, whose reign as the globe’s most feared heavyweight was followed by an epic fall from grace, was named Tuesday for induction into the International Boxing Hall of Fame and Museum.

Inductees were voted in by members of the Boxing Writers Association of America and a panel of international boxing historians. Posthumous honorees to be enshrined in June 12, 2011, ceremonies include bantamweight Memphis Pal Moore; light heavyweight champion Jack Root and middleweight Dave Shade in the old-timer category; British heavyweight John Gully in the pioneer category; promoter A.F. Bettinson and broadcaster Harry Carpenter. Tyson’s rise to fame, and subsequent fall to infamy, has become the stuff of legend rivalling any cinema ring drama.

He rose from the mean streets of Brooklyn, exploding on the boxing scene in the mid-1980s and becoming the youngest heavyweight champion in history in 1986 at the age of 20.

Considered unbeatable for the rest of the decade, Tyson’s career went off the rails when he suffered a shock upset to James “Buster” Douglas in 1990.

In 1992, Tyson was convicted of raping a beauty queen at a pageant in Indianapolis. He served three years of a six-year sentence and was released in 1995 - and has always denied raping the woman.

“Iron Mike” reclaimed the heavyweight throne but lost to Evander Holyfield in 1996 and notoriously bit Holyfield’s ears twice in a 1997 rematch, adding banishment to his ridicule.

He has battled substance abuse, been jailed for assault and his last opportunity to recapture the heavyweight crown in 2002 resulted in an eighth-round knockout at the hands of Britain’s Lennox Lewis.

Tyson filed for bankruptcy in 2003 and retired after losses to Britain’s Danny Williams in 2004 and American Kevin McBride in 2005.