Seeds of hope in a time of conflict

Seeds of hope in a time of conflict 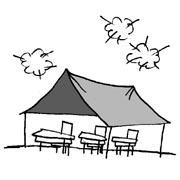 In 480 B.C., Xerxes I of the Persian Empire advanced to a point near Athens, causing Athenians to flee to Troy with their wives and children. For the refugees, food was the most important thing, yet they also did not neglect their children’s education. It was included in the official measures announced by the government: “The Trojans shall provide food to refugees from Athens at the cost of the government, and the government will pay wages to teachers who teach Athenian children.” It is a good example of the fact that in all ages and countries, the education of the younger generation is not stopped in a time of war.

In South Korea, there were refugee schools during the Korean War. Although students studied in make-shift tents and open-air classrooms, the war could not stop their zeal for education. Hwang Byeong-gi, a master gayageum (zither) player, started learning the Korean traditional musical instrument while attending a refugee school in Busan. In the beginning, they hung a blackboard on a utility pole and children studied on the street.

According to a written record left by Philip Joseph, ambassador-at-large under U.S. President Truman, 17,561 primary schools were open-air classrooms at the time.

Other refugee schools were established by residents of places where refugees sought shelter. They could not stand watching children of school age having to flee their hometowns and wander the streets.

Refugee schools were places of learning that planted seeds of hope in the minds of students suffering the effects of the war. The strength that motivated people to start all over again when the war was over also came from learning provided by those schools. On the back page of textbooks published with foreign aid was written: “Let us grow up to be workers who rehabilitate and rebuild Korea.”

A temporary school for the elementary, middle and high school students of Yeonpyeong Island, who fled the island because of the North Korean attack, was opened on Yeongjong Island on Monday. It was good to see students attending classes as usual, laughing and chatting. They may not be over the shock of having their hometown shelled, but they seem to be well on their way to recovery.

I am proud of them for showing that there is always a place for education, no matter what the conditions.