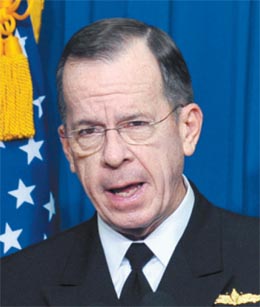 The heads of the U.S. and South Korean Joint Chiefs of Staff agreed to change defenses against North Korean attacks yesterday, with South Korea getting a leading role in immediate retaliations and the Americans pledging support.

The agreement was made as Adm. Mike Mullen, chairman of the U.S. Joint Chiefs of Staff, made an unexpected visit to Seoul yesterday to reaffirm America’s commitment to its alliance with South Korea. Mullen spoke with his South Korean counterpart, Han Min-koo, about North Korea early yesterday.

“North Korea’s attacks are getting bolder and bolder,” said Han. “If they choose to strike again they will be punished severely, and North Korea will pay a big price.”

Both parties agreed during the talks that though there was a low chance of a full-blown war breaking out on the Korean Peninsula, North Korea would continue to make new kinds of attacks on South Korea, which Seoul should prepare for.

“I did not tell South Korea to take air options off the table,” Mullen said when asked by a reporter if he had asked Seoul for restraint in its response to attacks. “South Korea is a sovereign nation that has every right to protect its people and to carry out that responsibility. They also have the right to choose the method with which they respond.”

Han explained that the changes made to response plans would mean that if North Korea decides to attack - whether in the air, on land or sea - the response would be carried out with South Korean military forces in the lead. If needed, U.S. forces residing in Korea or the Combined Forces Command would provide assistance.

Until now, South Korea and the U.S. have largely prepared for regular, full-scale warfare, but are now looking for ways to respond to the North’s new strategy of targeting individual ships or isolated regions, like the Yeonpyeong Island shelling that North Korea conducted last month, a Joint Chiefs of Staff official said.

Mullen and his delegation were also said to have understood Defense Minister Kim’s statement on immediate air strike retaliations against North Korean attacks. However, whether South Korea will be generally allowed to order attacks in self-defense is a decision up to the UN commander, according to South Korean Joint Chiefs of Staff Chairman Han.

“[Self-defense] is under UN jurisdiction and not something that should be discussed with Adm. Mullen,” Han said. “We discussed how our battle policy should be changed.”