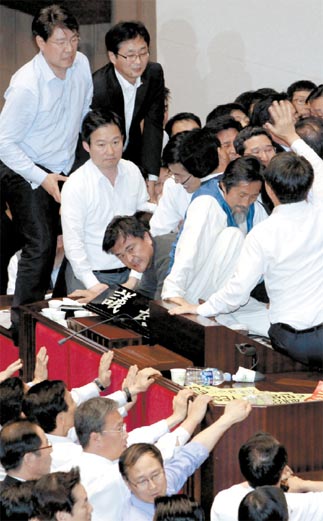 Lawmakers of the ruling Grand National Party and the main opposition Democratic Party scuffle yesterday at the speaker’s podium in the main chamber of the National Assembly as the GNP passed the budget bill for next year using its parliamentary majority. [YONHAP]

The very Korean tradition of parliamentary mayhem over sensitive bills returned to the National Assembly yesterday as ruling and opposition parties engaged in a chaotic brawl over the passage of next year’s budget.

The 309.567 trillion won ($270.72 billion) budget bill was passed at 4:52 p.m. yesterday following physical scuffles, scrum-like team action, a few thrown fists and general pandemonium that began Tuesday evening. Of the 166 lawmakers who cast ballots, 165 - mainly the Grand Nationals - voted for the budget, while one voted against it. The opposition boycotted the vote.

A slew of other bills, including the approval of troop deployments to the United Arab Emirates, was also passed. Of the 157 who cast ballots for the deployment bill, 149 backed the plan, two opposed it and six abstained.

The fierce battle began on Tuesday night, two days before the end of the regular legislative session. About 200 lawmakers and staffers of the Democratic, Democratic Labor and New Progressive parties entered the main lobby of the National Assembly building Tuesday evening vowing to deter the ruling Grand National Party from passing the budget bill with its parliamentary majority. Opposition members blocked entrances to the main chamber and to the meeting room of the budget committee in order to stop deliberation and voting.

After a violent scuffle, about 80 Grand National lawmakers entered the main chamber, while 50 Democratic lawmakers managed to seize the speaker’s podium. In the main lobby, the DP leadership continued their sit-in.

The rival lawmakers remained inside the main chamber overnight, and the battle resumed at 1:44 p.m. yesterday as more Grand Nationals tried to enter the main chamber to form a quorum. The main lobby descended into chaotic physical fights.

By 2:20 p.m., 160 Grand Nationals managed to enter the chamber, securing a quorum. The 299-seat National Assembly currently has 298 lawmakers and it requires 149 to hold a vote.

The Democrats blocked National Assembly Speaker Park Hee-tae from entering the chamber, and at 2 p.m., Park surrendered his right to present a bill and start voting to his deputy, GNP Representative Chung Ui-hwa.

Protected by National Assembly security guards, Chung entered the chamber and stood at the podium, declaring the opening of the plenary session at around 4:45 p.m. “I am embarrassed before the people,” Chung said. “It is lamentable that we have come to this situation. I feel extremely sorry to show this shameful situation before the nation despite the grave situation caused by North Korea’s shelling.”

Chung presented the budget bill as the first item. While opposition lawmakers jeered, the bill was passed at 4:52 p.m.

Earlier yesterday, the Grand Nationals approved the 309.567 trillion won budget in committee. According to GNP Representative Lee Jong-koo, the figure was 495.1 billion won lower than the original proposal.

While the ruling party cut 270 billion won from the controversial four-rivers restoration project, the administration’s signature program did not suffer a serious reduction, with 3.8 trillion won earmarked for the project left unchanged. Some changes were made to the defense budget. While the original proposal called for 31.28 trillion won, lawmakers increased the total defense budget by 141.9 billion won. Lawmakers also reallocated an additional 261.3 billion won to strengthen defenses of five islands near the western inter-Korean border in the aftermath of last month’s Yeonpyeong attack.