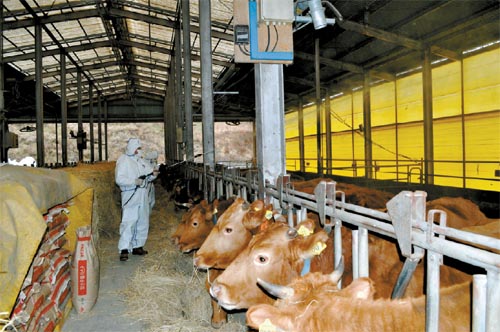 An employee of Gyeonggi Veterinary Service conducts disinfection work in its cattle pen in Yongin, Gyeonggi, yesterday. By Choi Mo-ran


YONGIN, Gyeonggi - The latest outbreak of foot-and-mouth disease, in which 100,000 heads of livestock have so far been slaughtered in the Andong area, has sent shudders through research centers that work with livestock.

The Gyeonggi Veterinary Service, in Yongin, Gyeonggi, is one of them. The institute known as the best of its kind in the nation, conducts research on the improvement of livestock breeds and the preservation of traditional animals.

Currently, 200 heads of bulls, 330 heads of pigs and 885 chicks are being bred at the institute for various research projects.

And, there is reason to worry. Last May, the Institute of Animal Science in Cheongyang County, South Chungcheong, had to slaughter all of its 1,500 heads of livestock due to an FMD outbreak.

Since the current FMD outbreak that began last month, all employees are working day and night, carrying out thorough quarantine measures, including disinfecting work areas. The 15 employees rarely go out of town.

All vehicles that enter the facility are being disinfected. Precautions are being taken with humans as well - all workers must wear quarantine clothing - masks, gloves and foot wraps. And there’s more - workers must be processed through a phone-booth type of contraption, where they are subject to ultraviolet rays.

“We usually do disinfection work once a day. But since the outbreak of FMD, we do it twice a day. And, sacks of lime are scattered around every corner of the pens,” said Ju Seok-cheon, a researcher of the institute.

Im Sang-gyun, head of the livestock research team, is worrying a lot. “I hope that FMD disappears as soon as possible.

“We will guard and secure the research we have been conducting so far even if we temporarily lose the contact from outside,” he said.

Beyond concerns at research institutes, there is a lot at stake nationwide. In Gyeonggi, the province with the largest number of livestock, there are 265,000 heads of cows, 174,000 heads of milking cows, 183,000 heads of pigs and 32,011,000 chickens. On top of that, livestock facilities such as slaughter houses are concentrated in the region.