Finding his game as a college coach

Finding his game as a college coach 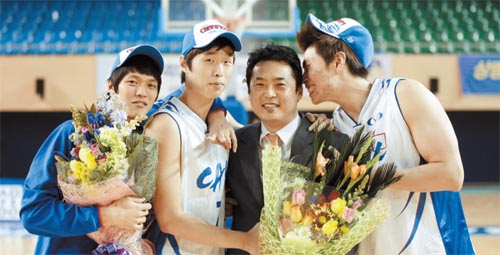 Kim Sang-joon, head coach of the Chung-Ang University basketball squad, second from right, posed with his players after the team won the championship on Wednesday. By Park Ji-hyeok


Basketball fans may not remember Kim Sang-joon as a basketball player, but the 42-year-old has established himself as one of the most successful head coaches in the collegiate ranks.

Kim broke into the KBL with TG Sambo (currently Dongbu Promy) and averaged three points and one rebound in more than three seasons as a forward. However, he has been far from mediocre as head coach of the storied Chung-Ang University basketball program, and Kim is already among the best collegiate basketball coaches of all time.

Kim’s Chung-Ang University squad defeated Kyung Hee University by a score of 83-73 on Wednesday to win the national championship and finish the season undefeated at 25-0. Chung-Ang University swept Kyung Hee University in the best-of-three series. Having led his team to 52 consecutive wins (regular season and preseason tourneys) in the past, an undefeated season capped off by a national title was another major accomplishment in Kim’s brief collegiate coaching career.

“Earning 52 consecutive wins was nice but going an entire season without a loss and finishing the season with a title is valuable,” said Kim.

Having faded from the professional ranks after three mediocre seasons as a player, Kim stumbled into his coaching career. After purchasing and operating a gas station in Hongcheon, Gangwon, Kim got an offer in 2001 to coach his alma mater, Myongji Middle School in Seoul. “I agreed to an interim coaching position,” Kim said. “But I found the job more appealing than running a business.”

Having made a name for himself at Myongji Middle School, Kim made a big jump and was named the head coach of the Chung-Ang University basketball program in 2006.

“I was single at the time and my ability to spend a lot of time with the players and focus all my attention on them seemed to have scored big with school officials,” Kim said.

Kim was met with heavy criticism and doubt from the start as critics asked how a powerhouse program could hire an unproven coach like Kim. “It was easy for people to criticize and point fingers,” Kim said. “However, such negativity proved to serve as a motivational factor for me.”

Kim earned the respect of his players by pushing them hard in practice but giving them freedom off the court. It didn’t take long for the Chung-Ang players to show results as they went on to win several tournaments.

Some observers say Kim has been blessed with excellent players on his roster rather than great coaching skills. Kim dismissed the slight. “Even if you have a roster full of top-flight players, it’s not easy to go an entire season without a loss,” he said.