What to do when the shells hit Seoul

What to do when the shells hit Seoul 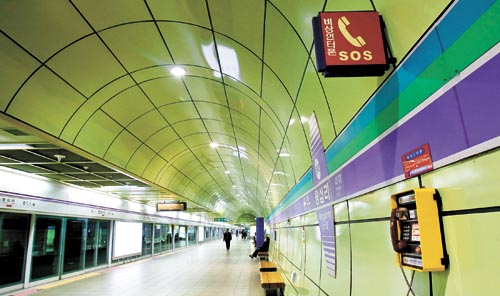 A few people wait for the next train at Wangsimni subway station. If a war breaks out, the station will act as a bomb shelter for up to 14,000 people. By Shin In-seop


Like most Seoulites, Hong Jin-ah, a 27-year-old graduate student, had never given a second thought to a North Korean invasion. Despite the rogue country’s close proximity to Seoul, most people here have grown deaf to the threat it poses.

But after Pyongyang leveled Yeonpyeong Island on Nov. 23 with dozens of artillery blasts, many here are now making contingency plans.

Hong was stumped when she considered where she would go if a war broke out. She turned to her smartphone for an answer. Her search for bomb shelters in Hapjeong-dong, western Seoul, turned up nothing. Next she checked a blog called “Find a Bomb Shelter in Your Town,” which also yielded little help.

Hong then took her search to the Dasan 120 Seoul Call Center, a citywide information hotline. “I live in Hapjeong-dong. Where should I evacuate to if there is a war?” Hong asked the receptionist. The answer she received was what most people already know: Head to the nearest subway station or basement.

According to Professor Kim Jang-ho of Yonsei University’s School of Civil Engineering, the best places to duck for cover are subway stations, apartment basements, and basements of other structures - in that order.

“Subway stations are the safest places to go, since there is less danger of buildings collapsing,” said Kim. “As for the case of the twin towers on Sept. 11, the pillars holding up the floors of the World Trade Center imploded, causing floors to collapse onto each other.” Most commercial high-rise buildings in Korea employ the same structure. If the pillars lose their integrity, the whole building will collapse.

“When it comes to regular apartment buildings in Korea, the walls support the building - rather than pillars holding up the structure - so there is less danger,” Kim said. 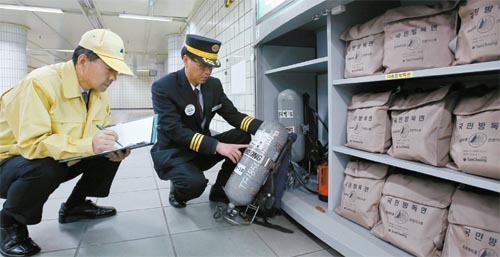 
Subway as a bomb shelter

The JoongAng Sunday checked Wangsimni Station in Seoul on Dec. 2, which serves lines No. 2 and 5. Over 73,000 passengers pass through the station every day, but only 14,000 would be able to jam into all available spaces in case of an emergency.

The station has five basement floors and has more space than City Hall Station.

The facilities in the station were in good shape. Emergency flashlights, emergency lights, communication facilities and water facilities were all well-maintained.

On the fifth basement floor, however, there were only four storage cabinets with oxygen tanks and fire extinguishers. There were only 25 gas masks that were just months away from the end of their five-year lifespan. The masks stored in a warehouse in Jamsil-dong were in worse condition. The masks, which were made in 2001 and 2002, had expired four years ago.

Kim Whan-kyun, head of the Seoul chemical, biological and radiological defense team, blames budget cuts after the government several years ago uncovered corruption and misuse of state funds meant for gas mask maintenance. “It is because the government cut funding after gas mask quality issues were brought to light,” he said. 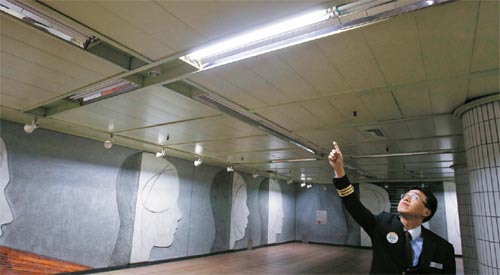 Kim points to an emergency light that can be powered by a generator. By Shin In-seop

There are 25,000 emergency evacuation facilities in South Korea and 3,919 in Seoul. There are no public air-raid shelters in the capital.

“Unlike on Yeonpyeong Island, there is no need to build extra air-raid shelters in Seoul, since subway stations and basements under large buildings can act as evacuation shelters,” said Kim Hye-kyung, the Seoul civil defense attache. “In the case of air raids by North Koreans, those shelters [in Seoul] are good for two to 10 hours.”

According to the National Emergency Management Agency, there is enough space in Seoul’s underground facilities (subway stations, basements, etc.) for 2.7 times the city’s population. The agency came to the conclusion by calculating that each person would need 0.825 square meters (8.9 square feet).

“To prepare for war, the Park Chung Hee regime encouraged construction companies to build basements when putting up new buildings,” said Yoon Myung-o, professor in the University of Seoul’s Department of Architectural Engineering. “Since then, most buildings were made with basements. Now, Seoul has more underground space than any other city [in Korea].”

Seoul’s 4,000 shelters are scored on a 1-4 grading system (with 1 being the most protective shelters), which is determined by landlords and local government offices. In Seoul, there are 1,481 “grade 2” evacuation shelters - which are largely tunnels, subway stations and basements of buildings. There are 2,246 “grade 3” shelters, which are basements of commercial buildings and underground roads. There are 192 “grade 4” shelters under smaller buildings. There are no public “grade 1” shelters that can withstand a chemical, biological or nuclear attack in the capital.

According to guidelines from the National Emergency Management Agency, shelters considered “grade 1” must be equipped with enough food and water for at least two weeks, generators, and communications equipment.

For a list of the nearest underground evacuation shelters, go to www.safekorea.go.kr.


Look up or look down?

A general rule of thumb: Go underground to avoid artillery and conventional bombing runs, but go up as high as possible in a chemical weapons attack. In the case of a chemical attack by North Korea, the basement is the worst place to go. Instead, head to the upper floors of tall buildings since chemical gases, which are heavier than air, tend to sink to lower elevations.

Another reason not to go underground: the deeper you go, the harder it is to pick up radio signals. In the case of war, experts say communication and information are just as important as food and shelter.

A go-bag is an easy-to-carry kit that’s been prepared in advance consisting of essential living items. It is common to have a go-bag for those who live in areas prone to natural disasters such as tsunamis.

It is also not a bad idea to pack a go-bag if your neighboring country is run by a tyrannical dictator who routinely threatens to turn the streets of your capital into “rivers of blood.”

So, what to pack?

Pack a mylar blanket. It’s light-weight, inexpensive and can fold to fit into your pocket. Also consider a radio, whistle, pocket knife, U.S. dollars, maps, a compass, water, food, personal hygiene products, prescription medication, extra keys to your vehicle or apartment, and your ID and passport.

All countries ask their citizens living abroad to register with their respective embassies.

After North Korea’s latest provocation, the Canadian Embassy’s security level in South Korea was maintained at “Exercise normal security precautions,” but Foreign Affairs and International Trade Canada issued an official warning “advising against all travel to the North-Western Islands [including Yeonpyeong, Daecheong, and Baengnyeong].”

The Canadian government’s emergency phone number for citizens abroad is (613) 944-1310.

Following the Yeonpyeong attack, the American Embassy issued a warden message: “The Embassy is closely monitoring the situation.”

The Australian Embassy warned of “very tense” relations between South and North Korea following the exchange of artillery. “We advise against travel to the Northern Limit Line Islands in the ROK,” the embassy advised on its Web site. “Australians in the ROK should continue to monitor developments closely and follow the instructions of local authorities.”

The British Embassy advises against travel to Yeonpyeong or to the other northwest islands of Baengnyeong, Daecheong, Socheong and Woo.

In a state of war, the Civil Defense Corps is activated and is responsible for keeping the peace.

The Civil Defense Corps was established in September 1975 and includes males between 20 and 40 years old. It was folded into the Civil Defense Department, which is under the National Emergency Management Agency, in 2004. There are 3.9 million reservists who could be called on to serve.

Many, however, worry about the Civil Defense Corps’ state of readiness. “Since the national civil defense system was established, it has become a target for budget cuts ... Civil defense drills have also been assessed as useless,” according to the National Emergency Management Agency.

Experts largely blame the liberal Kim Dae-jung and Roh Moo-hyun administrations for the corps’ deterioration. But even the Lee Myung-bak government, which many consider to be more pragmatic, has done nothing to repair the damage.

He said local governments have failed to keep up-to-date evacuation plans on hand and have not conducted evacuation drills.

“Our civil defense system is a matter of national defense, but the fact that it was incorporated under the National Emergency Management Agency in 2004 shows how [lax we are when it comes to security],” said Lee Eul-lo, head of the Civil Defense Unit for the Seongdong District Office. “It’s a time when we value farm equipment more than we do tanks.”