English golfer lifts herself into lead in Dubai Ladies Masters

English golfer lifts herself into lead in Dubai Ladies Masters 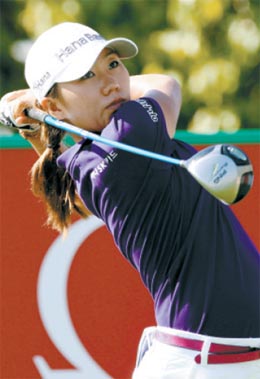 DUBAI - An early birdie blitz from Florentyana Parker lifted her into the lead after the opening day of the Dubai Ladies Masters, the season-ending event of the Ladies European Tour, here yesterday.

The 21-year-old from England made five birdies in her first seven holes, but a bogey on her penultimate hole saw her finish at five-under par 67, one ahead of Russia’s Maria Verchenova, who is playing on a sponsors’ invitation.

American superstar Michelle Wie, who triple bogeyed the eighth after firing an eagle on the third, settled for a one-under par 71, while defending champion In-Kyung Kim of Korea fared much better with a three-under par 69.

American teenager Alexis Thompson opened with a 73, but multiple major champion and world No. 16 Anna Nordqvist of Sweden was in the mix with a 70.

In the battle for the Order of Merit crown, leader Lee-Anne Pace of South Africa did not have the best of days as she opened with a 73, but got a bit of help from her only challenger Laura Davies, who struggled for a 75 after a late-night phone call ruined her sleep.

Parker, who has been spending the last couple of weeks in Dubai with a cousin who is a professional at one of the golf clubs here, got off to a great start with a couple of birdies on her opening two holes.

She then birdied the par-5 13th, and made successive birdies again on the 15th and 16th.

A winner in only her second year on the Tour, Parker said: “I hit it really close and made the putts. It was really fun.

“Then I had a par spell, and it was getting a bit boring and I wanted a few more birdies. But I made birdie on six, which was nice. I dropped a shot on eight but that was a tricky hole today. No, I’m really happy with my round.

“I’ve been here for nearly two weeks now practicing, because there’s snow at home. So yeah, it was great to be able to get prepared well.”

Verchenova started with six pars in a row, but the birdies came in a bunch after that and her only mistake was a bogey on the ninth hole.

After closing in style with birdies on the 17th and 18th, the Russian said: “It’s one of the weeks where I’ve got to stay positive. I didn’t have a good season, but I am trying to make a comeback with a positive attitude and a new coach, so it’s very good.

“It’s one of those weeks where I’ve got to get in the top-20 to keep my card. After all those pars, I was kind of getting a bit frustrated, I really wanted birdies. It was just to stay patient and the birdies started coming.”

After making an eagle on the third hole, Wie got into trouble on the eighth - her 17th - when she hit her driver left into a sandy area and took an unplayable.

After she dropped, the ball got plugged in the sand and she needed to hit a 52-degree wedge out.

She then missed the green.

The 21-year-old said: “I’m just happy to be done. I thought that I played pretty well. Hopefully I’ll make a couple more putts out there tomorrow and not have a seven on the card.”