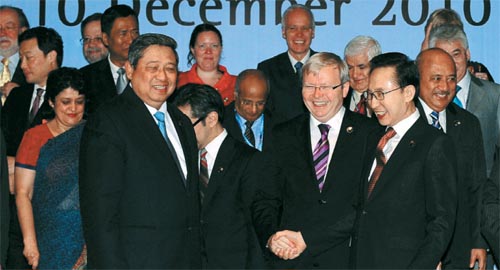 
Leaders of Korea and Indonesia, during a summit in Bali, agreed yesterday to strengthen bilateral cooperation in the defense industry and boost trade and investment ties.

President Lee Myung-bak had left for Indonesia Wednesday night to attend a regional forum on democracy and a summit with his Indonesian counterpart Susilo Bambang Yudhoyono.

During the summit, Lee and Yudhoyono agreed to strengthen ties in the defense industry. The Indonesian president proposed to jointly produce tanks, submarines and trainer jets and Lee was positively engaged in the discussions, Blue House spokeswoman Kim Hee-jung said.

“I and the Indonesian military prefer defense cooperation with Korea,” Yudhoyono was quoted as telling Lee. The remarks came as South Korea is seeking to export T-50 Golden Eagle trainer jets to Indonesia. While no specific deal was reached between the two leaders, Seoul officials interpreted the Indonesian leader’s position with optimism.

The T-50 Golden Eagle, developed as Korea’s first indigenous supersonic aircraft, is one of world’s few supersonic trainers. Seoul’s earlier bids to sell the trainer jets to the United Arab Emirates and Singapore failed due to the jet’s high price. Each T-50 costs more than 22 billion won ($20 million).

According to the Blue House, Yudhoyono also sought Korea’s participation in Indonesia’s economic development planning at the summit.

According to Kim, transportation, infrastructure and green technology development were mentioned by the Indonesian leader as fields of cooperation. Yudhoyono said he will send a special envoy to Korea early next year to discuss the plans more specifically, Kim said, and Lee replied positively to the proposal.

The two countries’ trade volume currently stands at 22 trillion won and Yudhoyono pledged to double the amount by 2014, Kim said.

After Lee and Yudhoyono sat down for a bilateral summit for 30 minutes, Indonesian cabinet ministers as well as top military officials joined them in another 30-minute expanded summit, indicating the country’s high expectations in economic and defense cooperation with Korea.