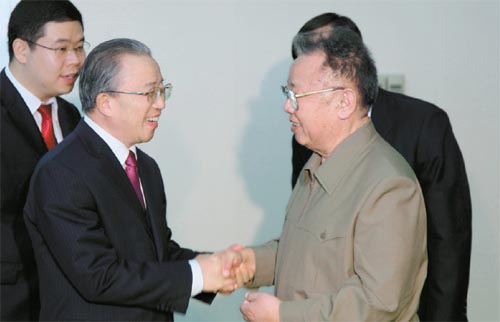 Ahead of KCNA’s report, China’s Xinhua News Agency reported the two sides had reached a “consensus” after “candid and in-depth talks.”

China’s foreign ministry spokeswoman Jiang Yu had nothing to share on the nature of Dai’s visit during a press briefing, other than confirming that Dai had visited Kim Jong-il.

China has been under mounting pressure from the U.S. and South Korea to rein in its neighbor after it avoided criticizing the North for shelling the island.

U.S. Representative Ileana Ros-Lehtinen, a Republican from Florida and the incoming chair of the House Foreign Affairs Committee, said yesterday that she would press for tougher sanctions on U.S. enemies, including North Korea.

“Rogue regimes never respond to anything less than hardball,” she said. The U.S. has been making efforts to persuade China to react to North Korea’s recent provocations, including the Cheonan sinking in March, the disclosure of a new uranium enrichment facility and the Yeonpyeong Island attack. A group of high-ranking U.S. officials plan to visit China next week, including Deputy Secretary of State James Steinberg; Jeffrey Bader, senior director for Asian affairs on the National Security Council; Assistant Secretary of State for East Asian and Pacific Affairs Kurt Campbell; and Sung Kim, the U.S. special envoy for the six-party talks. The group will visit China from Dec. 14 to 17 to discuss North Korea and next month’s summit in Washington between the U.S. and Chinese leaders.

A South Korean diplomatic source said the high-ranking delegation would deliver a message agreed upon during trilateral talks held in Washington this week among the U.S., South Korea and Japan, and demand China start encouraging North Korea to change its rogue behavior.

“The U.S. officials are not against six-party talks, but they will ask for a change from North Korea first,” said the diplomatic source. The U.S. turned down China’s request to hold six-party talks earlier this month.

Regarding the Washington summit in January, South Korean diplomatic sources say Hu feels the need for relations between the U.S. and China to improve, which may lead to a narrowing of the gap in the two countries’ North Korean policies.