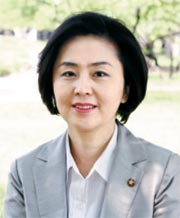 The South Korean National Assembly has taken a lead role in hosting the first financial meeting of lawmakers from Asean countries, as well as China and Japan, called the Asian Parliamentarians Finance and Economy Conference (Apfec), which will be held in Seoul today.

During the global financial crisis in 2008, the new Korean administration, which had just taken its first steps in South Korea, saw the country recovering from the financial slough that the rest of the world was mired in.

Korean lawmakers decided then that a conference should be held among a closer-knit group called the Asean+3 countries to strengthen the integration and stabilization of financial markets in the region.

The meeting today will be focused on discussing three main topics: financial cooperation in Asia after the global financial crisis, Asian bond market development and the development of investment banks in the region.

Ruling Grand National Party Representative Kim Young-sun and Ichimura Koichiro of the Democratic Party of Japan will co-chair the conference.

Kim, recovering from a day of violent National Assembly proceedings with party representatives tumbling over each other - literally - over next year’s budget, sat down with the Korea JoongAng Daily a day before the conference.

A lawmaker for the western region of Ilsan, Gyeonggi, Kim showed scratches and bruises from the day before. She provided a closer look into how South Korean lawmakers have been preparing for the international event, despite troubles at home.


Q. Can you explain what the Apfec is?

A. The Apfec is a conference that continues in the line of what we achieved during the G-20 Summit in Seoul last month. The summit gave us huge direction, as we were able to make agreements on support for developing countries and also to create a financial global safety net.

We will look at the issues that surfaced during the G-20 Summit and gather the logic and opinions of the Asian countries. We have learned from the global financial crisis that the era of a financial system revolving around several specific countries is coming to an end and that a [new] age is dawning.

It’s a different type of conference than what’s been seen before. In Asia’s case, countries had a pattern of asking for help or support from other countries in times of financial crisis, but now we will be forming a strong solidarity with our heads together.

South Korea has been seen by other countries to have sprung back from the global financial crisis comparatively quicker than others. Is there a special reason that Korea has been chosen to be the center of the conference? And what role is South Korea to play during the event?

With the G-20 Summit, South Korea has taken a leading role in the world’s finance and economy, and emerged as a mediator for developed and developing countries. To continue discussing the issues from the G-20, Seoul was selected as the host for this conference.

However, South Korea will not evaluate or intervene in other countries’ statements with a personal agenda. We are not interested in overtaking a particular Asian country or exempting another. We are interested in forming a brand that is Asia’s with its diverse cultures.

So as the host country, I believe South Korea will play a role like that of a maestro in an orchestra, actively organizing the wisdom of each Asian country.

There is an overall agenda for the conference, but as the co-chairman, do you have a personal goal or aim for the Apfec?

Two years ago I became head of the standing committee of the National Assembly that handles finance, in the middle of the financial crisis. My experience while I held that position told me that we shouldn’t stop at just [overcoming the financial crisis] but share innovative ideas and financial issues that had risen during the crisis and the process to overcome it on an international level.

At the Apfec there will be some 30 representatives from seven countries and although they come from different backgrounds and beliefs, the hardships and concerns are similar - stable jobs to maintain livelihoods, as well as improving the quality of life and providing good education for their children. The goal of this conference is to see these hopes become reality through finance.

As this is a conference on the financial economy of Asia, what do you think is the biggest threat to Asia’s economy at the moment or in the future?

Until now the start of financial troubles in Asian countries have usually been from excess borrowing from foreign countries. Financial investments or production were in either the U.S. or in Europe and thus were susceptible to movements outside Asian countries. We never had the chance to control or lead the financial market.

South Korea has recently been stricken by what most are calling the worst North Korean provocation since the Korean War, as Yeonpyeong Island was attacked last month. What effect do you think this will have on the South Korean economy as well as the overall financial state of Northeast Asia?

Looking at the situation after the Yeonpyeong Island attack, I think it’s safe to conclude that it did not have much of an effect on the financial market. I believe this is because we’ve been educated too many times on North Korean provocations, and now they’re seen as a time when people can buy into the market at a lower cost.

The problem here is that we are not thinking creatively about what to do with East Asia relations in the future because we are so absorbed in the present conflicts. What Asia needs now is an international network to share various values and cultures and the Apfec will be a way for Asia to take off in that sense.