From farm to market, culinary tour offers a return to the basics

From farm to market, culinary tour offers a return to the basics 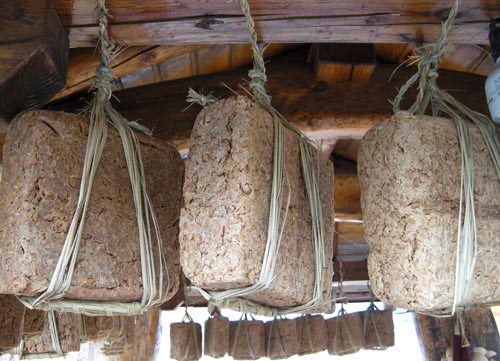 
YANGPYEONG, Gyeonggi - A glop of freshly cooked soybeans turned into perfect, golden squares of meju (dried fermented soybeans) as soon as Lee Bong-soon’s skilled hands got a hold of them.

The 86-year-old showed foreign journalists visiting her bean and jang (Korean sauce) farm how it was really done. “Don’t just massage the beans - firm them up!” she said, as her tone quickly changed from that of a friendly, next-door grandma to a stern teacher.

Lee has been making jang for more than 60 years at Jeolgol Farm, a remote bean farm in Yangpyeong, Gyeonggi. Along with the farm’s lucrative jang business - its organic sauces are now sold in such high-end venues as Shinsegae Department Store - it also holds farm tours, complete with nearby lodging.

“This is the real Korea that foreigners often don’t get to experience,” said Daniel Gray, chief of marketing and tours at O’ngo Food Communications. The company offers Korean culinary tours and cooking classes for foreigners.

Gray led a group of food and leisure journalists on a culinary journey around Yangpyeong and Chuncheon, Gangwon, featuring soybean paste, Chuncheon’s famous dakgalbi (pan-fried chicken ribs) and high-end Korean cuisine by chef Im Ji-ho of Sandang restaurant. The tour was sponsored by the Korea Tourism Organization and organized by O’ngo Food. 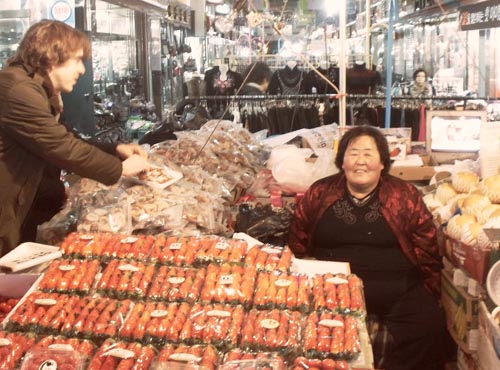 
Lee talked us through the jang-making process, revealing why her farm had become 100 percent organic in 2001.

“My son-in-law [Jeolgol Farm President Park Yong-up] collapsed while spraying pesticide on the farm 10 years ago,” she said. “We realized just how harmful these chemicals were and decided to go all organic.”

Jeolgol Farm makes around 90 bricks of meju a day, and the beans go through various stages of cooking and fermentation before they are sold. After clean soybeans are boiled and ground in a stone mortar, they are formed into blocks of meju. The blocks are then dried at 32 degrees Celsius inside a fermentation room.

“It’s crucial to keep the temperature even, so as to help healthy bacteria in the meju form. Also, hygiene is one of our top priorities because it is very easy for fermented food to get contaminated with bad bacteria,” said Park, the farm’s president. 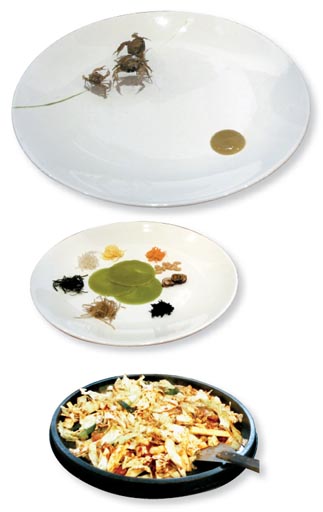 After the jang-making demonstration, Lee’s whole family, including her daughter and son-in-law, continued to make namul (seasoned vegetable side dishes) using the jang they made on the farm. Our lunch table was laid with dishes full of bright, verdant vegetables that gave off a pungent, nutty aroma.

“Whether it’s Korean food or Western food, if you have beautiful, organic ingredients, you really can’t go wrong,” said Lee.

As the sun started to set in Yangpyeong, we drove to nearby Chuncheon, famous for its beautiful lakeside scenery and pleasant weather. Along with its lakes and mountains, Chuncheon also has a glowing reputation for its two signature dishes - dakgalbi and makguksu (cold buckwheat noodles).

Tucked inside Chuncheon’s Joongang Market is Dakgalbi Street, the city’s most vivacious food street, which greets customers year round. The street came to prominence during the 1960s when soldiers and other Chuncheon residents gathered there to drink makgeolli (Korean rice wine) with side dishes cooked on small, charcoal barbecues. The dominant anju (Korean dishes consumed with alcohol) with makgeolli, was dakgalbi, which was relatively inexpensive and easy to make. 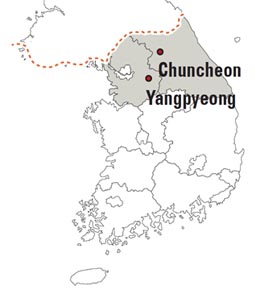 “On weekends, we get around 1,000 customers,” said an employee at Myeongdong Dakgalbi, one of the street’s most popular restaurants. Through her fast yet efficient stir-frying technique, the diced chicken, gochujang, cabbage and other vegetables were soon cooked to perfection - the chicken was still juicy while the cabbage retained its crispness.

By the time our enormous portion of dakgalbi arrived, the restaurant was jam-packed with college students and people in suits with loosened ties. Over dinner, our energetic tour guide in Chuncheon, Park Hee-chan, gave us a sneak peak of Chuncheon nightlife for young, college students.

“On most days after classes, my friends and I are most likely to be at a dakgalbi restaurant blowing off steam with some soju on the side. It’s an inexpensive, accessible dish that everyone likes,” said Park, who is also a senior at Kangwon National University.

Throughout the meal, involving perhaps a bit too much soju, dakgalbi and makguksu for our own good, Park enthusiastically introduced us to the newest drinking games on campus. 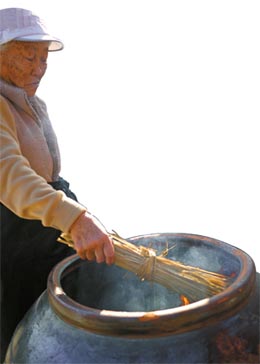 Lee Bong-soon stokes a fire before making meju at Jeolgol Farm in Yangpyeong, Gyeonggi. Provided by the Korea Tourism Organization

The next day, our group dined on high-end Korean cuisine at Sandang, a picturesque restaurant owned by chef Im Ji-ho. Remaining true to his motto that “food is a merger of art, science and health,” our nutritious 13-course lunch offered a balance of texture, color and taste. While dishes like the fried crabs served with mango sauce made us smile (the crabs were presented on the plate as if they were walking into the ocean), his simple yet elegant presentation of grilled pork with green onions was a reminder that Korean cuisine can be pretty - despite its reputation as lacking in visual presentation.

The other courses were a joyful merger of cooking techniques and ingredients from the East and West. For one of our final courses, our waitress flambeed a roasted chestnut in front of us in a perfectly nonchalant manner, as if the chestnut were cherries jubilee.

By the end of the culinary tour, after encountering different aspects of Korean cuisine - the necessity of well-made sauces and pastes, the accessibility of dakgalbi and the innovation of Sandang - I was surprised to realize how little I had known about Korean cuisine, despite my twenty-something years in this country.