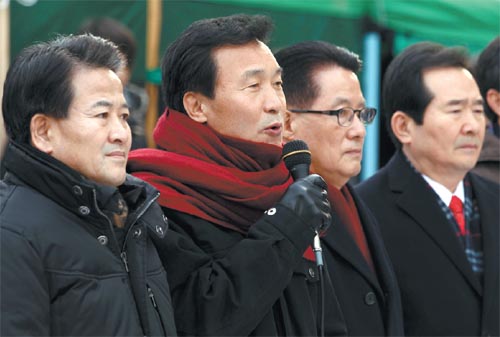 
The ruling party’s drive to amend the Constitution to change the current single-term, five-year presidency received cold reactions from both conservative and liberal opposition parties yesterday.

Representative Park Jie-won, floor leader of the Democratic Party, said the proposal is not only unacceptable but also unfeasible.

“I used to support the constitutional amendment, but I don’t think it is practically possible, and I don’t think there’s enough time,” Park said in an interview with CBS radio yesterday.

Grand National Party Chairman Ahn Sang-soo and Lee Jae-oh, President Lee Myung-bak’s minister without portfolio, announced their goal to amend the Constitution on Thursday, calling it a way to improve Korea’s political culture. On Wednesday, the National Assembly was consumed by the annual physical brawl that accompanies the passage of the government budget.

“They are talking about a constitutional amendment only one day after trampling down the National Assembly,” Park said. “That’s an act of disrespect not only of the Democrats but also the pro-Park Geun-hye faction inside the GNP.”

The DP leader said a constitutional amendment requires the support of two-thirds of lawmakers, making it impossible for the GNP to get it passed without the DP’s help. “Furthermore, the pro-Park Geun-hye lawmakers inside the GNP oppose it, so it is unfeasible,” he said.

Representative Park Geun-hye is a former GNP chairwoman and the strongest presidential hopeful in the party. Her loyalists comprise a sizable faction inside and out of the Grand National Party.

Park has been tight-lipped lately about her position on the proposed constitutional amendment. At a press conference in 2008, she said, “I have consistently argued that Korea should adopt a four-year presidency with a possibility of re-election, and my conviction remains unchanged.”

The conservative opposition Liberty Forward Party’s head, Lee Hoi-chang, also said it is wrong to bring up the constitutional amendment right after Wednesday’s legislative mayhem. “Even if I agree with the need for it, it is inappropriate and unwise to raise the issue right now,” Lee said.

Lee has long been a supporter of the constitutional amendment, but he was skeptical about the timing. “It is time for self-reflection,” Lee said.

In a November survey by Realmeter, 54.8 percent of respondents said they didn’t think the amendment would be possible before the end of Lee’s term.