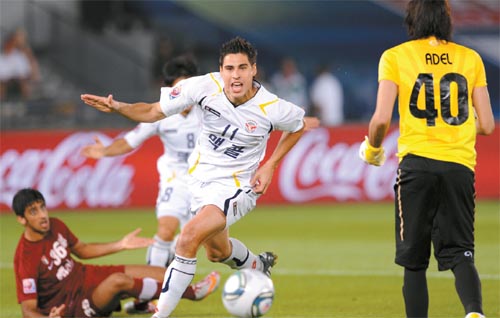 Seongnam, the winners of the AFC Champions League, easily disposed of Al Wahda in the quarterfinals by scoring early and often in a 4-1 win at Zayed Sports City Stadium and still has a chance to become Korea’s first Club World Cup winner.

Mauricio Molina opened the scoring for Seongnam merely four minutes into the match and although Fernando Baiano scored an equalizer in the 27th minute, that’s as close Al Wahda came to challenging Seongnam.

Sasa Ognenobski, Seongnam captain and AFC Player of the Year, responded by connecting on a corner kick to head in the go-ahead goal in the 30th minute to put Seongnam up 2-1. Seongnam continued to press its opponent in the second half with Choi Sung-kuk scoring in the 71st minute and Cho Dong-geon adding another in the 81st minute.

“I predicted that we would be able to earn an easy win if we scored the opening goal of the match but I did not expect a 4-1 win,” said Seongnam manager Shin Tae-yong at a post-match press conference. “Our players executed their roles well. Al Wadha has talented players on its roster but our players played a well-organized game and I think that made it tough on the opposition.”

With the win, Seongnam now has the difficult task of playing Italy’s Serie A league team Inter Milan. Inter Milan is coming off a dominating season in which it won the UEFA Champions League and Serie A league title, as well as the Coppa Italia, the Italian FA Cup. Inter Milan also won the 2006 FIFA Club World Cup.

“It will be a very tough match,” said Shin. “They are one of the best professional clubs in the world. The entire Inter Milan squad, including Sameul Eto’o of Cameroon and Wesley Sneijder of the Netherlands, can be devastating on the pitch, but Eto’o is the player who is the most intimidating of the group.

“The quality of our opponents is also the biggest reason why we are looking forward to the challenge. We’ll try our best and will look to take advantage of any weakness our opponents have. If our players set a clear goal for themselves, we’ll be able to net good results. We will not play timidly and will show that we are capable of playing alongside the very best.”

African champions TP Mazembe of the Democratic Republic of the Congo defeated Concacaf champs Club de Futbol Pachuca of Mexico, 1-0, on Saturday to advance to the semifinals. TP Mazembe will face Brazil’s Sport Club Internacional in the other semifinal match on Wednesday. The final and the third place match will take place on Dec. 19.