Gayageum player strives to carry on a legacy

Gayageum player strives to carry on a legacy 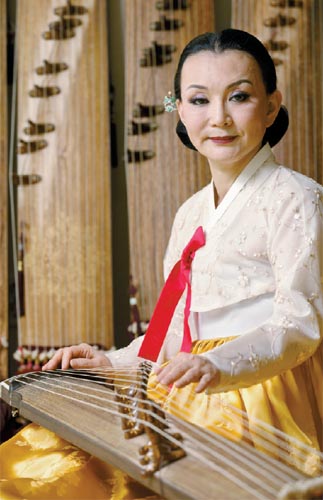 Yang Seung-hee, a gayageum player, is striving to pass down the legacy of Kim Chang-jo, who is considered the father of modern sanjo. By Park Jong-keun

When Yang Seung-hee was growing up, she was so committed to developing as a gayageum player that she moved in with her teacher after giving birth to her son. Those were decisive years for Yang, who is now so important to traditional Korean music that she has been designated an intangible cultural asset.

“Being a musician is a lifestyle, not a job,” Yang said in a recent interview with the JoongAng Ilbo. “Kids these days are smart - they know which person to align with to succeed.”

Yang appeared in a gayageum performance at the National Gugak Center on Nov. 3, which was held to celebrate Kim Chang-jo and the 120th anniversary of his version of sanjo.

A gayageum is a 12-stringed zither and sanjo is a genre of music that combines an instrumental solo with the accompaniment of the janggu, an hourglass-shaped drum. Kim is credited with developing sanjo for the gayageum in 1890 but it has since evolved to include other traditional musical instruments.

A poster for the concert in November featured Kim, considered the father of modern sanjo; his granddaughter, Kim Juk-pa, who is intangible cultural asset No. 23; and her successor, Yang. 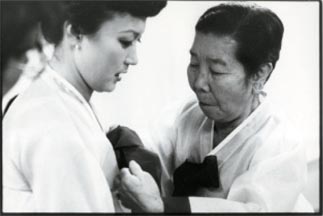 Yang Seung-hee, left, and Kim Juk-pa prepare for a concert in Japan in 1985. [JoongAng Ilbo]

“My mother was from Pyongyang and she loved Choi Seung-hee, a dancer from her hometown,” Yang said. “That is why she named me after her and the reason I began studying traditional dance and music.”

Yang was part of a choir at a U.S. military base in Wonju, Gangwon. It was the choir’s conductor who suggested she study the gayageum. So she started taking the train to Seoul every weekend to study with Kim Jeong-ja, a former professor of traditional Korean music at Seoul National University.

“On the days I came back from Seoul, my mother would check my progress,” Yang remembered. “She would set up a tower of 50 matches, and allow me to remove one every time I finished playing a piece. Whenever I moved a couple while she was nodding off, she would make me start over.”

Her efforts paid off. In 1969, Yang entered Seoul National University. During her second year, Kim Jeong-ja introduced her to Kim Juk-pa (whose real name is Kim Nan-cho).

The meeting changed her life.

“When I first met [Kim Juk-pa], she was blunt and stern looking. I was rather afraid of her,” Yang said. “But she loved me so much and always wanted me by her side.”

Kim Juk-pa was 59-years-old the first time the two met.

“[Kim Juk-pa] would say that if I wanted to turn into a true musician, I shouldn’t get married,” Yang said. “But when I got a boyfriend and told Kim I wanted to marry him, she requested a meeting with his mother.”

The two women worked out a deal: after Yang gave birth to a boy, Kim would fully support Yang’s career as a musician.

“I got married in 1976 and gave birth to my son the next year,” said Yang. “After I got out of the hospital I moved straight into my teacher’s home and I could only see my child and husband once a week. It was heartbreaking.”

It was then that Yang began pursuing her career in earnest.

In 1980, she received 5 million won ($4,600) from her in-laws to rent a performance hall to give her first solo performance. She decided to give the money to her teacher, but realized she had lost it.

“I knew that if I had obsessed about the money, I would lose my dear teacher,” Yang said. “So I just told her that it slipped my mind and ran out of the house crying.”

The money was eventually found in Kim’s house.

“She scolded me,” Yang said. “I cried and said ‘I’d rather not do the performance than lose you.’ She said that was the moment she decided to make me her successor.” 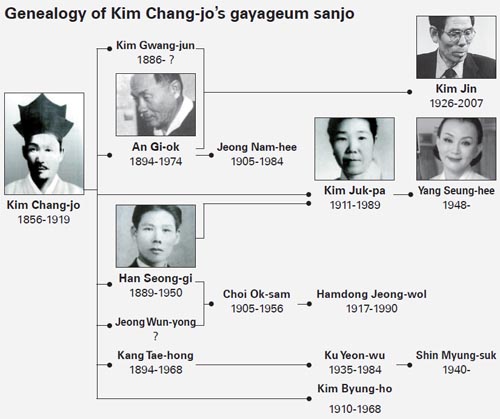 Kim Juk-pa, born in South Jeolla, did not have an easy life. Her mother died 10 months after her birth and her grandparents took her in. She learned to play the gayageum from her grandfather, Kim Chang-jo.

“I think her father thought that being a musician like his father would make him miserable,” said Yang. “That’s why he hated [his daughter] playing the gayageum. In those times, women had to be gisaeng [courtesans] if they wanted to be professional musicians.”

Kim’s father kicked her out of the house because of the music. Her grandmother took her to Mokpo to find a foster family. With the support of the family, Kim was able to continue playing the gayageum. She studied with one of her grandfather’s students, Han Seong-gi, for three years.

“She was a master at the gayageum, but she only played with a veil covering her face,” Yang said. “That’s because word got around that she was not the most attractive looking person.”

When one of her customers proposed marriage, she accepted, but afterward she went against tradition and continued playing.

“My teacher always said that her grandfather [Kim Chang-jo] was the one who combined sanjo with gayageum,” Yang said. “She insisted that because I had a college education, I would be able to [maintain] his legacy.”

Although the history of the gayageum goes back to the Gaya Kingdom (42-562), the instrument was only used for ensembles or as accompaniment for dance. Back then, performances were five to 10 minutes long, but Kim Chang-jo expanded them to longer than 40 minutes - much like the sonata in classical music.

“My teacher constantly told me that she wished she could cut off her hands and give them to me before she died, because I could never quite get the right sound,” said Yang. “But just before her last breath, she finally told me that I had made it and she had no regrets. I think I was able to be a true musician only after her death.”

To reach the level of her teacher, Yang said she spent another 10 years studying pansori (narrative singing), cheolgeum (a Korean glockenspiel), ajeung (a seven-stringed instrument), and janggu.

Although an instructor herself, Yang still works toward fulfilling her teacher’s wishes.

“During Kim Chang-jo’s time, they played without sheet music. The music was only taught orally and by rote,” said Yang. “My teacher wanted me to find her grandfather’s music to keep his legacy alive, but all of his students went to North Korea after South Korea gained independence [from Japan in 1945].”

But all hope was not lost.

Yang was able to find some music written by Kim Chang-jo in 1990 through Kim Jin, the principal of Yanji School of Art. Kim Jin studied for three years under Ahn Gi-ok, who studied with Kim Chang-jo for more than 10 years. Kim Jin had also written down the notes that Ahn played during their time together.

This prompted Yang to attempt to register Kim Chang-jo’s gayageum sanjo on the Unesco World Heritage list. She began by digitally documenting Kim’s work in 1999, also launching an academic symposium and festival on sanjo. Next year, a commemorative hall will be built in Kim’s honor in Yeongam County.

“Great art will always live on, even if there is no physical component to it,” Yang said. “Kim Chang-jo let his music flow through the southern part of the peninsula. My teacher carried on his spirit by playing it in Japan, and now I am continuing the line by performing at Carnegie Hall and Lincoln Center.”