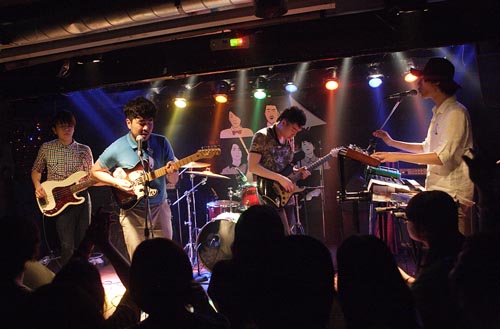 Indie band The Koxx plays in front of an audience. Provided by Happy Robot Records


When singer Song Eun-jie talks about her life as a musician in Korea, it is shocking to the general public, but sadly unsurprising to people familiar with Korea’s indie scene.

Song is the lead singer of Sogyumo Acacia Band and, in a cable television documentary in January, provided a stark reminder that however vibrant Korea’s television shows and pop culture have become in recent years, life for the country’s indie musicians remains extremely onerous.

But Song’s tale isn’t the only one of hardship among Korea’s indie musicians to make news this year.

After Moonlight Nymph singer Lee Jin-won died from a heart attack in early November, stories soon emerged of the serious financial difficulties he had reportedly faced near the end of his life.

Within days, rumors were circulating on the social networking service Twitter that Lee had received meager royalties for online use of his songs in a virtual currency called dotori, used on Korea’s Cyworld social networking site.

Cyworld’s parent company, SK Communications, swiftly denied the allegations. But the fact that they were so readily believed, and so widely posted on Twitter, spoke volumes.

Paradoxically, however, in some ways the indie scene in Korea has never had it so good. Practically nonexistent through the country’s decades of dictatorship and seclusion, Korea’s indie scene began to spring to life in the mid-1990s as the country opened up, became wealthier and gained increasing exposure to foreign culture.

In the space of a few years, a series of live venues and bands sprang up in the area surrounding Hongik University in western Seoul, which remains Korea’s indie epicenter to this day.

“Compared with 10 years ago, the changes in opportunities [for indie musicians] can look somewhat positive,” said Lee Gi-yong, lead singer with indie stalwarts Huckleberry Finn, who released their first album in 1998. “There are many more big rock festivals these days .?.?. there is much more home recording and using the Internet and social networking has spread enormously. For these reasons, musicians don’t have to go through music agencies, and they have a better chance of becoming famous through their creativity and ideas.”

But for Lee Hyun-song, vocalist with up-and-coming indie band The Koxx, shows like Space Gonggam are a drop of exposure in an ocean of media indifference.

“There are some shows on cable that introduce indie bands, but I think the position of indie on television is generally very low,” he said. “I think the problem is that all Korean media is simply dominated by K-pop and idols.”

“I think the big difference in Korea [compared with other music markets] is the huge emphasis on teen pop music. Not everyone likes pop, and not everyone is a teenager, which means there are several large music markets that are basically untapped,” Russell said. “Korea has a huge amount of creativity and energy in its music scene. The problem is that the whole structure is undernourished.”

This lack of resources remains a massive burden on the industry and, particularly, on musicians themselves.

In an age of collapsing CD sales, indie bands are lucky to sell even a few thousand copies of their albums. And this problem has been exacerbated by the thorny issue of downloads, even when they are obtained legally.

According to a recent media report, of the 500 won (44 cents) major music sites usually charge for a download, just 200 won makes it to the performer and his or her label once fees and copyright charges have been deducted.

Making matters even worse, most online music comes not through downloading individual songs, but from monthly subscriptions for streaming sites. For this, indie bands can see as little as 50 won per song. And despite the increasing number of rock festivals income from live performances doesn’t offer much support.

“Musicians make most of their money from shows, but few of them make enough for it to even be worth [it],” said Lee Gi-yong.

Unsurprisingly, such low income makes it very difficult for indie performers to survive on music alone. Some, such as members of The Koxx, take side jobs as session musicians or music teachers. Given these difficulties and the inherent instability of being an indie musician in Korea, the obvious question is, why do it?

“We just want to play the music we like to lots of people,” said Lee Hyun-song of The Koxx. “We want to get a lot of love in Korea, and to get proper recognition overseas as well.”