A crash course in Korea

A crash course in Korea 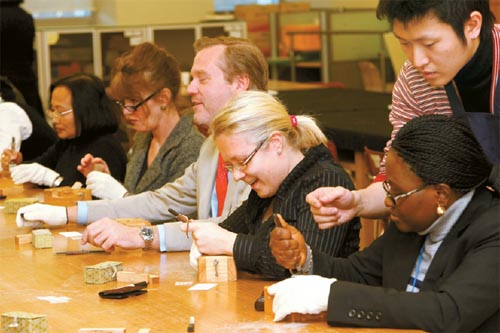 Diplomats from various countries learn to craft a seal with their Korean-written name carved on it at the National Museum of Korea in Ichon, Seoul, on Thursday. It was part of the Introduction of Korea to Foreign Diplomats Program, a two-day program arranged by the Ministry of Foreign Affairs and Trade for newly arrived diplomats in Korea. By Oh Sang-min


A 50-minute lecture might feel like a bit of a drag, especially if it was on an ultra-serious political issue such as North Korea.

But that wasn’t the spirit at all when dozens of diplomats from various countries gathered in a lecture room at the Institute of Foreign Affairs and National Security in southern Seoul, Thursday morning.

The diplomats came to hear a lecture on the security situation on the Korean Peninsula, an increasingly hot-button issue after North Korea’s recent provocations and its disclosure of a new uranium enrichment facility which could significantly increase its ability to make nuclear weapons.

A handful of diplomats raised their hands during the session to ask questions of Choi Kang, a professor at the institute who is an expert on North Korean issues.

The questions ranged from North Korea’s botched currency reform to North Koreans’ stance on unification to the exact meaning of juche (self-reliance), which is the governing ideology of the military-based regime.

Others asked about South Korea’s options in responding to any additional North Korean provocations. One diplomat even questioned a contingency plan that the South Korean government has for evacuating foreign diplomats in South Korea in an emergency situation.

Choi, who frequently lectures on the subject at programs for diplomats, said their interest was higher this time around than before.

“Diplomats usually show a high interest on the issue of security on the Korean Peninsula, but this time they were more focused on the lecture than previous times because of recent events,” he said.

According to institute officials, many of the participants in the “Introduction of Korea to Foreign Diplomats Program” kept up their interest throughout the two-day program.

Since being launched in 1999 by the Ministry of Foreign Affairs and Trade, the program has been provided on an annual basis.

Until last year, around 400 diplomats had participated in it. More than 50 diplomats from around 40 countries attended this year’s program, according to the institute.

The program introduces to diplomats, mostly the ones recently dispatched to South Korea, the society, culture, history and foreign policies of the country. The experts on each of the areas give a lecture in English.

This year, a lecture about the results of the G-20 Seoul Summit was added to brief envoys about the November event, which many Koreans think marked the successful transformation of the country from a poverty-stricken land to an advanced nation.

Apart from the lectures, field trips such as a visit to the National Gugak Center in Seocho District and a tour of the National Museum of Korea in Yongsan District were also arranged for the diplomats.

At the museum, they were given opportunities to play the instruments of gugak (Korea’s traditional music) and craft a seal with their Korean name carved on it.

“Those were good programs to give some general ideas of Korea,” said Luis Gonzalez, third secretary at the Embassy of Mexico in Seoul. Gonzalez, who has been in South Korea for nine months, said he found the lecture on Korean culture and history the most interesting of the talks he attended.