Last week, the Chinese People’s Liberation Army, which had rolled over the ROK’s defensive lines, was defeated in its attempt to make it to Gangneung, Gangwon, to restock on supplies and was driven back north. 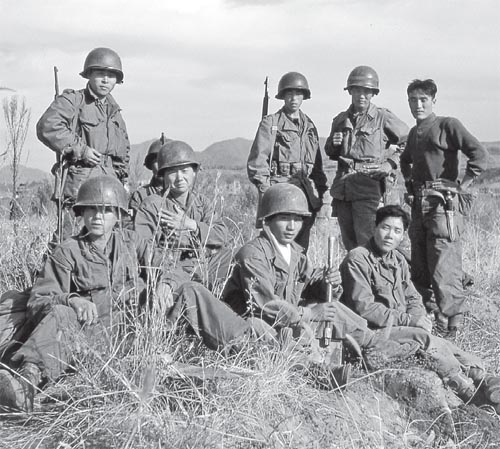 This photo of Korean soldiers was taken by John Rich, a Korean War correspondent for NBC News. [YONHAP]


As the war progressed, ROK and U.S. troops earned crucial victories over the Chinese People’s Liberation Army. The PLA, which once seemed unstoppable as it drove down in massive numbers, no longer had that air of invincibility.

But allied victories came at a cost. While the ROK Capital Division protected the Daegwallyeong area north of Gangneung, Gangwon, and pushed the PLA intruders back into North Korean territory, the ROK 3rd Division fared poorly.

In fact, it was so badly defeated in a battle on May 16 that the few soldiers remaining were not even properly clothed. After crumbling and allowing the PLA to break through the defensive line, they disobeyed orders and retreated south.

While retreating, the rest of the allies counterattacked and pushed the Chinese forces back north. I decided to follow some of our troops as they advanced north past Inje and Wontong, Gangwon. From what I recall, the PLA seemed to have lost their drive and motivation by this point in the war.

The PLA had taken a gamble in directing the majority of its troops to the weaker eastern defensive line covered by the ROK military. Its early victories against ill-prepared ROK forces proved to be short lived and they were driven back to North Korea.

My ROK 1st Corps had seized the area stretching as far as Ganseong and Geojin to the east, while ROK and U.S. troops to the west had used the opportunity to pressure PLA soldiers.

There was now no chance of the PLA mustering enough strength for another major attack. But their victories against Korean forces would prove to have a lasting significance. 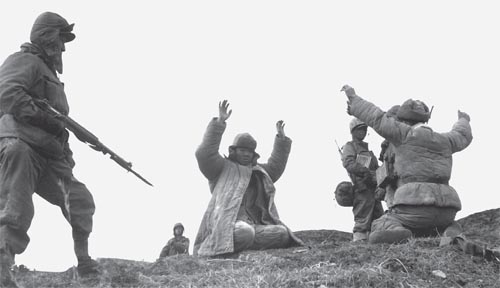 U.S. Marines give orders to captured Chinese People’s Liberation Army troops in May of 1951. Provided by U.S. National Archives


On May 25, 1951, Gen. James Van Fleet of the U.S. 8th Army flew out to Gangneung. This was the site of the ROK Army’s forward command post, which was in charge of commanding the troops on the front lines.

“We will disband the ROK 3rd Corps. The ROK Army will also lose its right of operational command of its troops. The ROK Army will retain its command over administrative, training and human resources. The ROK 1st Corps will follow my command from here on in and the forward command post will be abolished,” he said.

General Chung Il-kwon, the chief commanding officer of the ROK Army during the war, looked distressed upon hearing the news, but did not say a word. It must have been demoralizing for General Chung to have to give up his command, but he could not bring himself to say anything.

General Van Fleet was not finished. The ROK 9th Division, which had previously been a part of the ROK 3rd Corps, was to join the U.S. 10th Corps, and the ROK 3rd Division was to merge with my ROK 1st Corps.

It dealt a huge blow to the ROK Army. The ROK 2nd Corps had already been disbanded after a crushing defeat at the hands of the PLA in October of 1950 and now the ROK 3rd Corps faced the same fate. The ROK 1st Corps was now the only outfit of its size in the ROK Army.

After the breakout of the Korean War, President Syngman Rhee made the request to UN headquarters on July 14, 1950, that the ROK Army gain wartime operational command of its troops, which at the time was led by Gen. Douglas MacArthur. General MacArthur approved in principal three days later. Although the ROK Army never had full control of all of its troops on the front lines, General Van Fleet was now revoking what control the ROK had over its armed forces. General Van Fleet received the approval of President Rhee in advance.

According to records from the ROK Army headquarters, General Van Fleet ordered the ROK 3rd Corps to retreat no farther than Hajinbu-ri, Gangwon and to hold their ground there. But a distressed ROK 3rd Corps failed to follow orders and fell all the way back from Hwengaeri to Yeongweoll on May 21.

Having taken in the bad news, I began to ponder the fate of the ROK Army. We had faced great adversity and had done a respectable job on many occasions. Considering that we did not have adequate equipment, weapons or food, I thought we had done well. Regardless, we were still a weak army and that is precisely the reason why the defensive line under our control in Gangwon was targeted by North Korean and PLA troops.

It was clear we were in need of drastic changes.

When looking back on the Korean War, the conflict that started out between South and North Korea transformed over time. In fact, the battles along Nakdong River would be the last time North Korea had a significant impact on the war. The PLA - which joined the war in October of 1950 - outnumbered North Korean troops eight to two in ensuing battles.

We did not fare much better. Although we played a significant role in the war, we made up merely 30 percent of the allied forces, with U.S. personnel making up the biggest portion of the group, and UN troops also making a large contribution.

In an ideal scenario, the million or so South Korean male population would have been enough for a formidable army. But a lack of weapons and proper training meant we were far short of being capable of carrying out a war on our own.

It was only natural for the American commanders to show displeasure at the results with which the ROK Army produced on the front lines.

The way I saw it, our men were driven and showed strong determination when facing a tough situation on the front lines. They really came together as a team.

One problem ROK troops constantly faced was a loss of short-term focus. They seemed to sense an imminent end to the war and got carried away in their optimism. Our optimism made us vulnerable. We had guessed at the time that we were close to defeating the PLA, but we were hit hard by the Chinese and were pushed south.

While commanding the ROK 1st Corps, I had the pleasure of meeting Adm. Arleigh A. Burke, commander of Cruiser Division Five in the East Sea. During a time when I was concerned about the future of the ROK Army and how to develop our personnel, Admiral Burke stressed the importance of taking the time to develop and train the ROK Armed Forces.

Aside from the basics of proper equipment and weapons, our military personnel needed battlefield experience. Admiral Burke noted that certain cultures had an innate ability to fight or defend themselves based on learned experience.

He went on to say that developing a navy could take at least 100 years.

As a small nation, Korea had been subjected to Japanese colonization in the past, but we managed to maintain our identity and culture. This was an indication of our strong will and determination.

In order to keep our morale high during time away from combat, it would be necessary to maintain strong organizational skills among the leaders and keep up proper training. Only then could we expect to possess stable military personnel that are capable of performing to their capabilities during times of combat and maintain readiness in times of peace.

I had the opportunity of working with or fighting against Japanese, Chinese and American troops. In my mind, the U.S. troops and their ability to efficiently carry out tasks in tough situations was unparalleled.

We still had a lot to learn from our American allies.