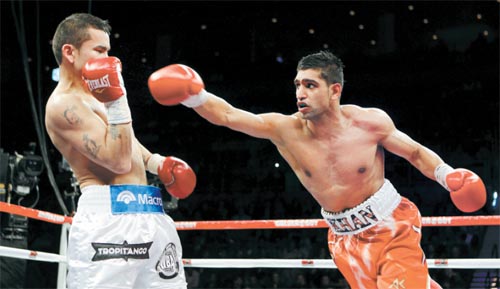 Amir Khan of England, right, punches Marcos Maidana of Argentina during the third round of their WBA super lightweight championship boxing match on Dec. 11 in Las Vegas. [AP/YONHAP]


LAS VEGAS - Amir Khan successfully defended his WBA 140-pound title with a narrow unanimous decision over Marcos Maidana on Saturday, surviving the stiffest test of his career with guts and skill.

Khan (24-1, 17 KOs) knocked down Maidana with 10 seconds left in the first round of the British champion’s Las Vegas debut with a vicious left hand to the body, and the fight never really slowed down from there.

The free-swinging Maidana seemed to be close to stopping Khan during a brilliant 10th round, but Khan absorbed every shot from his Argentine opponent and responded with a strong 11th.

Khan finished his third title defense with blood dripping from his nose. Still scarred by a first-round knockout loss in his only defeat more than two years ago, Khan has grown tougher and stronger.

“I know I made mistakes, but I worked hard and came back stronger than ever,” Khan said. “He’s a strong fighter, and he hits hard. My chin was tested. I’m not taking anything away from him. He’s a great champion. I proved today I’ve got a chin.”

Maidana (29-2) was hurt by a point deduction by referee Joe Cortez in the fifth round, apparently for throwing an elbow at Cortez in frustration when the referee broke a clinch. Judges Jerry Roth and C.J. Ross scored the bout 114-111 for Khan, and Glenn Trowbridge favored the British fighter 113-112. The Associated Press also favored Khan 114-113.

Maidana attempted to leave the ring after the decision was announced, but his promoters pulled him back.

“I thought I won,” Maidana said through a translator. “I thought I did enough in the final rounds to win the fight.” The tone was set in the opening seconds of the fight when Khan approached the middle of the ring with his glove raised in good sportsmanship - and Maidana instead threw a sneaky left hook that barely missed. Maidana then landed two shots to Khan’s head in the opening minute, putting his opponent on the defensive immediately.

But Khan caught Maidana with two body shots in the final seconds of the first round, and his left hand to Maidana’s abdomen sent the Argentine to his knees.

Khan also dominated the second round, but Maidana caught Khan with two big punches early in the third.