He is a prince, but only in dreams

He is a prince, but only in dreams 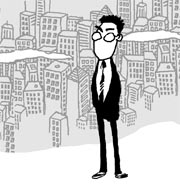 City life is usually described as busy, cold-hearted and lonely. So maybe that’s why city dwellers are always reaching out for warmth. Numerous examples in literature and song illustrate this well.

Jo Yong-pil, singer-songwriter of “The Panther of Mt. Kilimanjaro,” wrote that “a city sometimes gets greater than the night before, but it also gets poorer the next morning.” Choi Seung-ho, the author of “Rush Hour,” said that a city is a place where daily routines repeat themselves from rush hour to rush hour. And poet Gi Hyeong-do said in “The Eye of a City” that it is a place where even snow falls bleakly “as if in a war.”

These images of urban life are reflected in the newly coined word “chadonam,” which translates to “cold city man.” In reality, he is a professional and a workaholic who speaks fluent English, has a taste for luxury items and, of course, is well dressed. He is cold and somewhat inaccessible. He is also a ladies’ man. The inspiration for the chadonam is often traced to the lonely tough-guy characters Humphrey Bogart played in hardboiled detective movies like “The Maltese Falcon” and “The Big Sleep” in the 1940s. A cigarette hanging from his mouth and an emotionless expression on his face, he is cynical and smart, but a man of few words, as if short sentences are the only ones that exist. But even this tough guy has a weakness - women.

In “Casablanca,” Rick, the protagonist played by Bogart, makes the heart-breaking decision to give his beloved Ilsa and her husband exit papers so they can escape to the United States, even though he wants to be the one to run away with her. Film critic Roger Ebert wrote that Bogart’s character is not always cold-hearted but that he covers up his romantic tendencies by pretending to remain aloof.

In the SBS drama “Secret Garden,” the chadonam is Kim Joo-Won (Hyeon Bin), the son of a wealthy family. The show has been popular thanks to Hyeon Bin’s appeal, earning ratings of 20 percent, perhaps because so many women dream about finding a prince of a man like Kim and so many men dream of becoming like him.

Unfortunately, no chadonam can possess all the merits of ability, good taste and attentiveness. Men can and should keep striving to achieve these qualities, but women may have to endure the “solitude of 5,670 million years,” as the poet Ham Sung-ho wrote, before seeing her prince arrive.