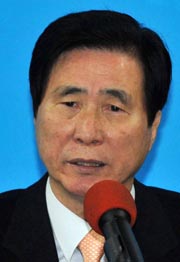 Representative Ko Heung-kil resigned yesterday as the chief policy maker of the Grand National Party, after the Buddhist community’s fury over a cut in the budget for its temple stay program.

In a press conference, Ko said he was resigning in order to take responsibility for the budget cut, which broke a ruling party promise of funding to the Buddhists.

“No matter what the reasons were, I failed to keep the party’s pledges on parts of the national budget, including money earmarked in the Culture Ministry for the temple stay program,” Ko said. “I deserve a severe reproach.”

Ko said the GNP’s internal review showed that he had failed to fulfill his responsibility as budget gatekeeper at the final moment.

“Although the Culture Committee increased the temple stay budget and sent it to the budget committee, I found out too late that it was cut there,” Ko said.

The ruling GNP lawmakers approved next year’s 309.567 trillion won ($270.72 billion) budget on Wednesday after a violent brawl with opposition lawmakers.

After the details of the budget were disclosed in the following days, the Jogye Order, the country’s largest Buddhist sect, severely condemned the Grand Nationals for failing to keep its promise to increase the temple stay budget.

Temple stays, a signature cultural program that allows tourists to experience Buddhist culture firsthand, received 18.5 billion won from the government in 2010. That number was slashed to 12.25 billion won for 2011.

Ko said he had met with the Ahn Sang-soo, GNP chairman, and other leaders Saturday and they accepted his offer to resign to calm the Buddhists. “I hope this incident will be concluded with my resignation,” he said.

Another Grand National lawmaker also held a press conference yesterday to defend the party and the administration against the Democrat Party criticism that budget items linked to people’s livelihood had been cut, while the region represented by the president’s brother, Pohang, enjoyed an unfairly larger allocation.

Calling the money earmarked for Pohang “the elder brother budget,” the Democrats said money for nine projects in Pohang were increased by at least 144.9 billion won from the initial government bill. Representative Lee Sang-deuk is the elder brother of President Lee Myung-bak.

“The projects began during the Roh Moo-hyun administration, and they are taking place in areas that 11 lawmakers represent,” said GNP lawmaker Lee Byung-suk, who represents the northern district of Pohang. “It is wrong for the Democrats and some media to criticize the budgets as if they were a product of unfair favoritism.”

A large sum was allocated to a railway project linking Pohang with Samcheok of Gangwon province and building a double track between Ulsan and Pohang. “Over the past 60 years, the east coast, including Pohang, has been left out of the railway network of the nation,” said Lee. “It is hard to accept the criticism of regional favoritism, while we worked hard to secure the budgets for the long-delayed projects.”

While the GNP defended the budget, the Democratic Party demanded President Lee apologize for the ruling party’s railroading of the bill and cuts of money linked to people’s livelihoods. The DP said it will submit today a resolution to revise the budget and another resolution to withdraw the National Assembly’s approval of troop deployments to the United Arab Emirates, which was also passed last Wednesday.