Feeling lonely? Snuggle up to your smartphone

Feeling lonely? Snuggle up to your smartphone 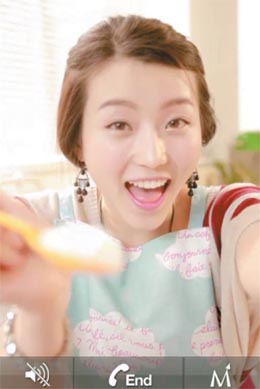 A virtual girlfriend in an application called “Honey, it’s me!” Captured from the App

For lonesome guys who can’t find a girlfriend, or people living apart from their families, smartphone applications and social networking sites are helping fill the void with virtual relationships.

One application called “Honey, it’s me!” has been designed for guys desperate for a girlfriend, even a virtual one. The app calls the smartphone owner three or four times a day and treats him to a video conversation with his virtual girlfriend Mina.

With a perfect body and a disarming smile, the gorgeous, 22-year-old Mina speaks lines that can melt a guy’s heart.

“I saw a horror movie today and I’m so scared,” she purrs. “I miss you honey! Good night, I will see you in my dreams.”

A real Korean female model played the part of Mina, and she recorded roughly 100 different conversations. Users say her video chats are almost - almost - as good as the real thing.

A user nicknamed “Ostin” posted a review of Mina on a Web site called AppsApps. “I wish I could meet Mina before I die,” he wrote. “I recommend this application to lonely single guys who will struggle through the cold winter this year without a girlfriend because Mina will make them forget the fact that they are single.”

Released by Nabix on Nov. 30, the application was downloaded more than 100,000 times during its free-of-charge promotion period. It is now being sold by the iPhone App Store for $1.99.

Kim Yun-gak, who helped create the app for Nabix, said, “I wanted to make a humane application to relieve people’s loneliness.”

People missing the folks back home are heading to the “umma_bot” and “tweets_papa” Twitter pages. The system uses a kind of “bot,” short for robot, that sends automated replies whenever a user posts on one of those pages. Twitter introduced many such services in 2006, but Koreans only became interested when the automatic reply came in the voice of a mother or father.

While the mommy bot nags about bad habits or the lazy daily lives of the user, the daddy bot says things like: “Where are you now? It’s almost midnight. Mom is now upset. Please help me keep peace at home, dear,” or “You know I don’t have any political power in this house. That is your mother’s decision.”

An Sae-ru, a 25-year-old single woman living in Seoul, has lived apart from her family for five years and said the function provides comfort in her tough city life.

“Whenever I tweet to the bots that it’s hard to work late into the night, warm messages come back from them,” An said.

Kim Bong-seop at the National Information Society Agency said, “The increasing number of nuclear, nonextended families and the growth of the Internet industry lead people to seek affection in the online world.”

Gartner Inc., an information-technology research company, said in a report released on Dec. 2 that in 2015 about 10 percent of friends on online services will be displaced by nonhumans. It said one-in-10 friends on social media sites such as Facebook or Twitter will be automated conversation partners, thanks to development of artificial intelligence.