This Xmas season, there are two nuts to crack at the ballet

This Xmas season, there are two nuts to crack at the ballet 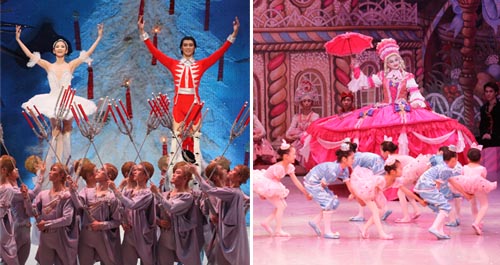 The Korea National Ballet, left, and the Universal Ballet Company are set to stage The Nutcracker later this month. Provided respective companies


Since its debut in Korea 24 years ago, “The Nutcracker” has been staged by various ballet companies and in multiple versions every holiday season. The ballet, represented by dazzling Christmas ornaments, snowflakes and magic, will be presented again this year by Korea’s two biggest ballet companies - the Korea National Ballet and the Universal Ballet Company - beginning later this week. The production by the state-run troupe will strictly follow the choreography of the legendary Yuri Grigorovich, who led Russia’s Boishoi Ballet for 33 years. His version had its world premiere in 1966.

“All of the mimed movements have been changed to dances, which means that a heavy portion of dances are technically challenging,” the KNB said in a press release.

For instance, the guests who are invited to the Christmas party dance as they step on stage and a petite child dancer performs The Nutcracker, which in other versions is played by a wooden doll.

UBC, on the other hand, has chosen the original 1892 Ivanov choreography designed for the Mariinsky Theatre in St. Petersburg, Russia. UBC advises the audience to pay particular attention to the dance entitled “Mother Ginger and her Children” from Act 2. The dance, according to a UBC press release, “is the most fun for children, given that 10 child dancers come out from under the gigantic skirt of Mother Ginger.”