At Siggraph Asia, the sky is the limit

At Siggraph Asia, the sky is the limit


Computer graphics have come a long way in 30-plus years. It didn’t grab all that much attention until “Star Wars Episode IV” made a big splash in 1977. Now, it is a multibillion dollar industry.

In terms of computer animation, the 1995 film “Toy Story” was the first full-length 3-D animated movie to be released.

With eye-catching visual effects and full computer-generated imagery, anything is possible. From Hollywood movies to PC games, computer graphics experts are involved with almost everything you see on screen.

And Siggraph, considered the “Academy Awards” of the computer graphics industry, is at the center of it all.

Short for Special Interest Group on Computer Graphics and Interactive Techniques, Siggraph has been held for 37 years since being established in 1974. Hosted by the Association for Computing Machinery, the North American-based event has become the largest and most respected conference on computer graphics, with new techniques and technologies exhibited and introduced there each year.

With Asian countries showing great interest and skill in developing computer graphics, Siggraph started holding an Asian version in 2008 - first in Singapore, then in Yokohama, Japan last year. Now, Siggraph Asia 2010 will make its way to Seoul, with the conference scheduled for tomorrow through Saturday and an exhibition scheduled for Thursday through Saturday. Both are at COEX in Samseong-dong, southern Seoul.

The main attraction and highlight is the Computer Animation Festival, which presents the finest achievements in computer animation and visual effects.

The Computer Animation Festival is divided into two categories: the Electronic Theater and the Animation Theater. The Electronic Theater screens a limited number of computer animation and visual-effects movies, which represent the best in the latest innovations selected by an international jury of renowned industry experts. The Animation Theater, selected by the same jury, screens digital shorts.

“The quality of work selected for this year’s festival represents the most creative sparks and freshest ideas from around the world, which inspire the artists, designers, researchers and scientists attending the festival,” said Jinny HyeJin Choo, the chair of the Computer Animation Festival. “The Siggraph Asia 2010 Computer Animation Festival has received more entries this year, allowing us to broaden the scope of programs and include stronger content. In addition, more local computer graphics companies and individual creators have been involved in the submission process.” 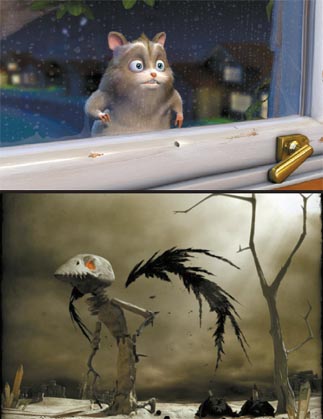 Koreans will represent some of these world-class production units. ILM Singapore’s Kim Ki-bum will talk about visual effects from the 2010 movie “Iron Man 2,” and Leon Jeong Wook Park from Pixar will introduce new techniques in simulation from “Toy Story 3.”

No Korean pieces were selected for the Electronic Theater, but seven were chosen for the Animation Theater. Chang Wook-sang, professor at Chung-Ang University, Shin Hoo-pyung of Kaist, and Choi Jin-sung of Brian’s Film will present animations.

Choo said the Korean participants’ technical and artistic displays were very high in quality and that they deserved selection.


Another important aspect of Siggraph Asia is the Courses program, which will consist of a series of educational sessions by industry experts on the theory, application and inspiration behind advances in computer graphics and techniques. Top computer graphics institutions will participate, along with some of the most talented people in the industry.

“There is a good balance between technical and artistic courses, with tracks covering gaming, animation techniques, visual effects, real-time techniques, GPU computing and the fundamentals of computer graphics,” said Sophie Revillard, the Courses chair. “In addition, a wide array of hot topics will be covered. These include creating feature-quality games, and stereoscopic 3-D.”

Other features of Siggraph include the Technical Papers, Technical Sketches and Posters, and Trade Exhibition sections. Technical Papers will deal with technologies and research, which will be presented and discussed after being selected from hundreds of submissions. Topics will include algorithms, imaging, image and video processing, modeling, rendering and simulations techniques.

A graphic is shown as part of a technical paper for a practical appearance model for dynamic facial color.


Technical Sketches and Posters will deal with unique ideas that are currently in development, but not fully developed for general use. Trade Exhibitions will involve leading hardware, software and robotics companies.

Siggraph also helped its own cause by lowering admission fees for the Computer Animation Festival, hoping more Koreans will take part.

After this year’s Siggraph Asia, organizers will chose two countries that will trade hosting rights every other year. Seoul officials are vying for one of the spots.