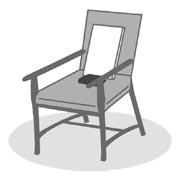 Indian mathematician Brahmagupta called the number zero shunya in 600 B.C. Shunya is a Sanskrit word for emptiness and nothingness. He was the first to use zero as a number for absence of quantity based on a philosophical concept of void. Before Brahmagupta gave zero the characteristic of emptiness, zero was not considered a number on its own but a mere placeholder digit indicating a lack of quantity.

The significance of the emptiness is not limited to the world of mathematics. Absence is not just a physical void but can refer to the meaning of life and the rule of nature. In both Western and Eastern legends, the world always began from nothingness. In the beginning, there was no heaven, no earth, no water, no light, no darkness and no time. It all started from an empty space with no bottom and no ceiling. After all, the universe was just a dot the size of a “0” before the Big Bang 13.7 billion years ago, so we cannot blame the legends and myths for being outrageous.

Religions pursue the true self and mind of mankind, with emptiness also being a religious word. In Buddhism, your mind does not have a substance but is empty like the void. Emptiness is found everywhere. The endlessly wide empty space in the universe is what the Buddhists call “Sunyata.” To the eyes of the awakened souls, whole things in the universe exist in the empty space.

Emptiness is also a rule of nature that helps you realize what you do not know and are not aware of. Professor Robert Root-Bernstein, the author of “Sparks of Genius: The Thirteen Thinking Tools of the World’s Most Creative People,” uses the example of a jigsaw puzzle to explain what emptiness means. The unfilled space is as important as the completed picture because it shows what the missing piece is. It gives us a clue to what we do not know, and once we figure out what to look for, we are a step closer to finding the right piece for the empty spot.

The Nobel Peace Prize was awarded a few days ago in Oslo, Norway, and the key of this year’s award ceremony was the empty seat. Chinese human rights activist Liu Xiaobo was named the winner of the prize, but the medal and the award were put on an empty chair. The empty chair is not just a physical space. It symbolizes the absence of human rights in China. Despite the censorship of the Chinese government to block the news, Chinese citizens made various attempts to view the empty chair online to witness the solemn reality. The absence of Liu Xiaobo should be a missing piece of the human rights puzzle for the Chinese authorities.