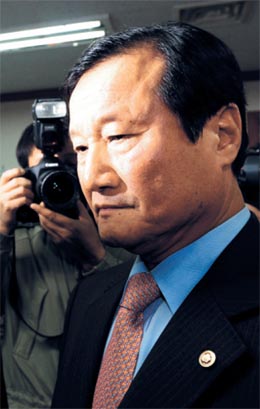 Despite a frantic attempt to calm a storm of criticism over the rough and ready passage of next year’s budget last week, the Grand National Party leadership faced renewed flack yesterday from the Buddhist community, the opposition Democratic Party and even the Ministry of Strategy and Finance.

Minister of Strategy and Finance Yoon Jeung-hyun visited Grand National Party headquarters yesterday to meet with the party chairman, Ahn Sang-soo, to discuss the handling of the budget. While the party said earlier in the day that Yoon was visiting to apologize for slashing funds for a temple stay program the GNP had promised the Buddhist community, Yoon offered no apology and ended up in a shouting match with Ahn.

Upon arriving at headquarters, Yoon made clear that his ministry is not to be blamed for the fracas with the Buddhists.

“I do not agree with some Grand Nationals’ argument that the government lacked in its preparation because some budgets were slashed during the bill’s deliberation,” Yoon said.

“I appreciate the Grand Nationals for passing the budget bill before the deadline this year,” he continued. “But there were some miscommunications during the process, and I’d like to discuss how to make it perfect.”

Yoon also said the ruling party must respect certain standards and principles when it comes to budgets and fiscal affairs. “With the rapid economic recovery of the past two years, we were able to maintain our fiscal health,” Yoon said. “That is only possible because we have respected certain principles.” He dismissed the Democratic Party’s demand for a supplementary budget.

After a solemn photo session, Yoon and Ahn retired for a 45-minute meeting behind closed doors. Angry shouting by Ahn was heard in the hallway.

After the meeting, the two were tight-lipped about what had transpired. Asked if Yoon had apologized, Ahn said, “I yelled at him” and “He expressed regret.”

GNP lawmakers approved next year’s 309.567 trillion won ($270.72 billion) budget last Wednesday after a lengthy and violent brawl with opposition lawmakers. After the details of the budget were disclosed in the following days, the Jogye Order, the country’s largest Buddhist sect, harshly condemned the Grand Nationals for failing to keep its promise to increase the budget for a temple stay program. The GNP’s chief policy maker, Ko Heung-kil, resigned Sunday to assume responsibility for the broken promise.

Despite the ruling party’s attempt to pass the buck to the Finance Ministry, the Buddhist community’s rage showed no signs of abating. The Jogye Order yesterday held a press conference to up the ante, saying it intended to reject any financial assistance from the Lee administration because of what it called its religious bias.

“We will no longer demand the government’s budget for the temple stay program until the end of Lee’s term,” said the Venerable Wondam, spokesman of the Jogye Order. “We will welcome guests in the humble way of Buddhists.”

“Our rage grew because the ruling party and the government treat us as if we were in debt to them,” said Wondam. “Even if the budget is restored through some means, we will flatly reject it.”

The Jogye Order also said it wants the National Museum of Korea to return all Buddhist cultural assets to the sect. “They are sacred treasures but the museum just stores them in the underground vaults,” Wondam said. “Unless the government changes its understanding about Korean culture, there will be no compromise.”

Wondam also said the Buddhist community will start protesting against the government’s four-rivers restoration project because it believes it will damage the environment.

The Democrats, meanwhile, stepped up their pressure on the ruling party. Yesterday marked the Democrats’ fifth day of a sit-in at the Seoul Plaza in central Seoul, and they submitted a motion to the National Assembly to void the budget.

The Democrats demanded the entire GNP leadership step down. “President Lee and the Grand National Party must delay the approval of the budget by the cabinet and revise the specifics for a new vote at the National Assembly,” said DP Chairman Sohn Hak-kyu. “If that procedure is too difficult, they must create a supplementary budget bill.”

The Democrats have argued that the ruling party and administration only paid attention to budget items they cared about, such as the four-rivers restoration project, while cutting funds for welfare programs for the elderly, a vaccination subsidy for infants and free meals for children of poor families.

The Democrats argued that the Blue House was behind the Grand Nationals’ hurried passage of the sloppy budget bill and demanded that more higher-ranking politicians than Ko Heung-kil take responsibility.

“Ko’s resignation is nothing more than a movie scene in which a gangster agrees to fall on his sword for his boss,” said DP Representative Chun Jung-bae. “President Lee, who directed the movie, must apologize, and the assistant directors [National Assembly Speaker] Park Hee-tae, [GNP Chairman] Ahn Sang-soo and [GNP floor leader] Kim Moo-sung, must step down.”

Despite criticism, the cabinet approved the budget bill yesterday. A senior government official told Yonhap News Agency yesterday that the government and the GNP will restore budgets that were cut, including the temple stay program subsidy, by reallocating money.