Fishing boat with crew of 42 sinks off Antarctica

Fishing boat with crew of 42 sinks off Antarctica 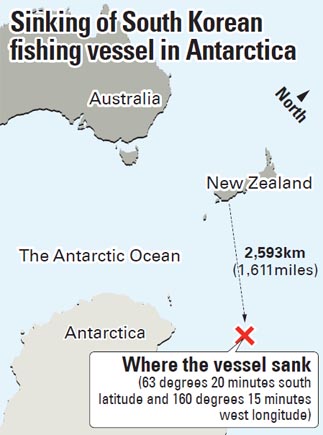 A Korean fishing vessel carrying 42 crew members, including eight Koreans, sank off Antarctica yesterday, leaving five crew dead and 17 others missing, the Ministry of Foreign Affairs and Trade said yesterday. The cause of the sinking was unknown.

Only one Korean was rescued. Two of the confirmed dead were Korean and the Korean captain is among the missing, the ministry said. The ship also had eight Chinese crew, 11 Indonesians, 11 Vietnamese, three Filipinos and one Russian.

Rescue mission operators said the chances the missing sailors will survive are slim because of the cold water temperature.

Five fishing vessels that were operating nearby - three Korean and two from New Zealand - were mobilized for rescue operations coordinated by Maritime New Zealand.

Maritime New Zealand said on its Web site that it considered mobilizing an Orion aircraft and a Hercules aircraft, but gave up on it.

“Unfortunately, given the short survival time in waters of those temperatures and the length of time it would take for the Orion and Hercules aircraft to reach the search area, it was not a viable option,” said Dave Wilson, a search and rescue official at Maritime New Zealand, on the Web site.

Rescue vessels collected the bodies of the dead, including Choi Eui-jong, a 33-year-old first mate, and Ha Jong-geun, a 48-year-old first engineer. Two Indonesians and one Vietnamese were also dead. The captain, Yu Yeong-seob, 45, is among the missing along with chief engineer An Bo-seok, 53; first engineer Mun Dae-pyeong, 44; cook Jo Gyeong-yeol, 55; and Kim Jin-hwan. Five Indonesians, four Chinese and three Vietnamese are also missing.