Priests call on cardinal to resign

Priests call on cardinal to resign 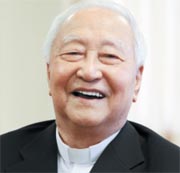 A group of Catholic priests is calling for the resignation and an apology from Cardinal Nicolas Cheong Jin-suk, saying he distorted the views of archbishops who oppose the four-rivers restoration project.

Cheong had said last Wednesday that the archbishops, during a private meeting in March, did not oppose the project.

The archbishops, in fact, had released a public statement after their meeting in March, saying they oppose the project.

The group of priests, about half of whom are retired, said yesterday that the cardinal clearly misinterpreted the archbishops’ position. The priests, who believe the cardinal supports the project, demanded an apology from Cheong yesterday.

“The cardinal’s interpretation against the clear and concrete conclusion of the archbishops’ meeting has caused social confusion and division in the church and he should take responsibility for [his remark],” the priests said at press conference at the Franciscan Education Center in central Seoul.

Heo Yeong-yeop, a priest working for the public relations division of the Archdiocese of Seoul, said yesterday that the cardinal’s political stance on the project was neutral.

“Both parties, who agree and disagree on the project should not misunderstand that the cardinal’s remark as absolute support for the project,” Heo said. “He just clarified and interpreted a previous statement released by the archbishops in March.”

Kim Eun-young, an official at the Catholic Bishops’ Conference of Korea, said that since the conclusion of the archbishops’ meeting was made in secret, “nobody knows how the cardinal showed his opinion about the project at the meeting.”

“And we have no comment regarding the cardinal’s personal opinion.”

The discord began Wednesday, when the cardinal was being interviewed by reporters about his recently published book, “God’s Way, Human’s Way”.

“The archbishops meant they expect some risks in developing the [old] rivers and damages to nature, [and are] not saying they are against the project,” Cheong said. “It could sound like they don’t agree with the project. But their remarks could also be interpreted as support for developing [the rivers in a better way] so that we can overcome [possible project risks.

“If the [four-rivers restoration project] aims to improve things, it has no problem. But if it [results in] destruction, it should be stopped.”

Two days after the interview, another group of priests, the Catholic Priests’ Association for Justice, a so-called leftist group, held a press conference Friday saying they oppose the four-rivers project and argued that the cardinal distorted the outcome of the archbishops’ meeting.