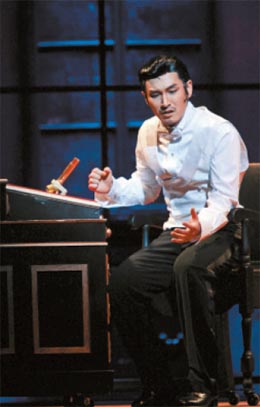 Cho Seung-woo performs in “Jekyll and Hyde,” which runs until March 31. [JoongAng Ilbo]

When tickets went on sale for the Korean version of the musical “Jekyll and Hyde,” which opened Nov. 30, demand was so high that the online reservation server broke down after 15 minutes. The musical, which runs through March and stars Cho Seung-woo, is already sold out through January, as are all of the performances in which Cho is scheduled to appear.

Jekyll and Hyde was also popular when it premiered here in 2004, nearly selling out with 98 percent ticket sales. When it played here again in 2006, the production attracted 350,000 viewers and was so successful that it later toured to Japan.

The musical is based on “Strange Case of Dr. Jekyll and Mr. Hyde,” a 19th century British novel by Robert Stevenson that deals with the different sides of human beings and the battle between good and evil.

It premiered in the United States in 1990 and opened on Broadway in April 1997, where it ran until January 2001, garnering critical and commercial success.

It is difficult to pin down what has made the musical such a hit in Korea, but the main attraction appears to be Cho, its leading man, who alternates in the role with two other actors.

When Cho transforms from Jekyll, the pure and fragile doctor with a mellow voice, into the monstrous Hyde, Cho imbues the character with so much passion that the audience gets transfixed.

Cho dominated the musical theater scene in sold-out productions of “Hedwig and the Angry Inch,” “Rent” and “Man of La Mancha” before he left the theater to complete his mandatory military service two years ago.

Cho’s return to the stage just before “Jekyll and Hyde” opened on Nov. 30 was marked with controversy following reports that his salary would be the highest for any musical theater actor in Korean history.

Aside from Cho’s much-anticipated return to the stage, the musical, with music by Frank Wildhorn and lyrics by Leslie Bricusse, has also remained popular with Korean audiences for its musical numbers, including “This is the Moment,” “Once Upon a Dream” and “Someone Like You.”

The duet “In His Eyes” is a particular favorite here. Sung by Lucy Harris, a prostitute at a bar where Jekyll has his bachelor party, and Emma Carew, Jekyll’s fiancee, the song illustrates the rivalry between the two.

“Confrontation,” sung by Henry Jekyll and Edward Hyde, is another popular number that comes at the musical’s climax and expresses the inner conflicts between Jekyll and Hyde.

The musical’s tragic love story is another draw for Korean audiences. Although the original Stevenson story did not contain a romantic subplot, its many cinematic incarnations did and the musical takes its inspiration from there.

The tangled relationship between Jekyll, Hyde, Emma and Lucy represents the duality of human relationships - the good Dr. Jekyll loves Emma but his evil alter ego Hyde is attracted to Lucy.

Go to Jamsil Station, line No. 2 or 8, exit 3, and go past the front entrance of the Lotte Hotel.