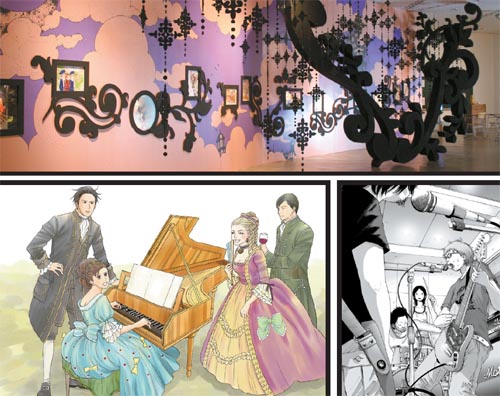 Strips from popular manga are featured in a new exhibition at Artsonje Center that creates three-dimensional installations of the works, which include, clockwise from top, “Sugar Sugar Rune” by Anno Moyoco, “Beck” by Harold Sakuishi, and “Nodame Cantabile” by Ninomiya Tomoko. Provided by Artsonje Center


In “Sennen Gaho [One Thousand Years Diary],” a manga (Japanese graphic novels) by Kyo Machiko, random moments of daily life come together like a lyrical puzzle through the eyes of the protagonist, a high school student.

The manga depicts simple objects, including flowers or water, to give off hidden, layered meanings that allow readers to create their own narrative world through the author’s images.

In a new exhibition at Artsonje Center, the popular manga is given a second life. Strips from the manga are reprinted and plastered on large white boards as if they were puzzle pieces.

“Sennen Gaho is not about a particular narrative but is a collection of images and fragments of daily life that makes us see things in a different way,” said Park Mi-young, a curator at Artsonje Center. “Manga is no longer just a two-dimensional subgenre.

Popular manga books are now being made into movies, computer games and so forth. By bringing manga into a gallery space, we wanted to heighten the visual and interactive experience that it brings to its readers.”

In the exhibition, titled “Manga Realities: Exploring the Art of Japanese Comics Today,” the works of nine popular manga artists are featured as part of three-dimensional installations that go beyond the two-dimensional world of the books. In doing so, the exhibition explores manga’s potential to span various artistic genres.

“The most challenging aspect of the exhibition was to translate the very personal, deeply imaginative experience of reading a two-dimensional manga into the context of an art museum’s very public, three-dimensional spaces,” said The Japan Foundation, the exhibition co-organizer. To create entirely immersive installations, the foundation said it tried to incorporate visual, audio and interactive elements.

The nine manga books featured in the exhibition are all works that were published after 2000. In addition to Sennen Gaho, included are commercial hits such as “Nodame Cantabile” by Ninomiya Tomoko, “Solanin” by Asano Inio, and “Beck” by Harold Sakuishi, as well as cult hits like “Children of the Sea” by Igarashi Daisuke.

Nodame Cantabile, a manga that was first serialized in Kiss magazine in Japan from 2001 to last year, tells the tale of two aspiring classical musicians. It was then adapted into a television series in Japan and, later, in Korea. The Artsonje exhibit offers a sensory experience of the manga, with the music featured in the manga playing on an automatic piano beneath Victorian-style chandeliers.

Visitors to the Solanin exhibit will be able to read the manga and see the author’s original sketches in a cozy room that was designed to reflect the artsy, youthful sentiments of the manga’s main characters, Meiko and Taneda. Solanin centers on these two characters and their friends, all of whom face the harsh realities of life after college.

“We included toy figurines, books, clothes, furniture and accessories that reflect the [Solanin] characters and their tastes,” Park said. Visitors are invited to go inside, sit on the couch and read the manga.

The exhibition, which started in Japan, will tour Australia and the Philippines after it closes in Korea on Feb. 13. Visitors are welcome to read all of the original manga books in a reading room on the first floor of Artsonje.