A Nobel in literature is Lee’s goal, but a little credit is just as good

A Nobel in literature is Lee’s goal, but a little credit is just as good 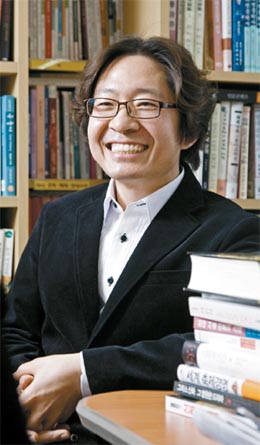 Fifteen years ago, Joseph Lee dreamed of becoming a scholar of English literature as an enthusiastic follower of British novelist Joseph Conrad. But life does not always turn out as planned. After getting a job with publishing house Imprima Korea to pay for his Ph.D. tuition, Lee set out on a path that would change both his life, and more broadly, the Korean literature scene.

Now executive director of the agency, Lee has been behind a recent series of major deals to export translations of Korean novels. In addition to being an agent for best-selling authors such as Kim Young-ha and Shin Kyung-sook, he currently mentors lesser-known writers such as Pyeon Hye-young, Han Gang, Ha Il-ji, Lee Ki-ho and Kwon Chi-ye.

Earlier this month he published his own book, “A Man Selling Novels,” which details his experience and vision as a pioneer in the export of Korean literature.

The Korea JoongAng Daily sat down with Lee last week at his office in Seogyo-dong, western Seoul, to talk about his work.

A. I randomly choose and read Korean novels and meet the authors if their books interest me. When both of us click, I introduce the work to Barbara J. Zitwer, my agent in New York. She maintains a wide network with noted publishers and editors, not only in the United States, but in countries around the world. Then I tell her briefly about the novel, and if she likes it, I send a one or two page synopsis in English.

The synopsis is supposed to be done by a qualified translator, not me, because it acts as a crucial basis for a future deal. If Zitwer likes the quality of the literature and the translation, I have my translator do the first 50 to 100 pages of the novel so the agent can send it to subagents around the globe. Such coordination made it possible for me to export Shin Kyung-sook’s “Please Look After Mom” to 20 countries in such a short time span.

Without such a system, however, the process would have taken me forever. Still, many Korean publishing companies [instead] contact respective overseas publishers. This sporadic publication of Korean literature [is not as effective].

Do you have specific standards when choosing books to be translated and exported overseas?

I am pretty open-minded when it comes to selection. What I want to point out is that overseas publishers have one common opinion about Korean novels: They are too dark.

Of course they appreciate the quality of the works, but Korean authors aged between 40 and 70 mostly take on similar topics. Those born before the 1950s deal with Koreans’ anger and bitterness under Japanese colonial rule, those born between the 1950s and 1960s [write about] suffering during the Korean War, and authors of the 1970s and 1980s obsess with the country’s democratization process.

The writers need to know that overseas readers have little knowledge of Korea. Younger readers in foreign countries want to know how Korea’s younger generations live in the present. Korean authors tend to be overly past-oriented, although apparently those in their 20s and 30s seem to have diversified their topics and styles.

What are your visions?

Seeing one of my authors win the Nobel Prize in Literature may be my long-term goal. My personal aim is to have them receive positive evaluations from overseas readers and critics. More concretely, I want to see at least five full-length novels translated into 15 languages and loved by readers in respective regions [in the next] 20 years. That’s my 5-15-20 scheme.

Even if Nobel Prize in Literature winners such as Toni Morrison, Doris Lessing and Mario Vargas Llosa sound unfamiliar to ordinary readers, their creations have been translated and distributed across the globe for decades. Who among Korean authors can you name with such a history? It’s hard to come up with any.

Helping them does not only require government-level support, but more important is the role of agents and publishers who actually work in the field.