‘Multicultural’ Korea is really nothing new

‘Multicultural’ Korea is really nothing new 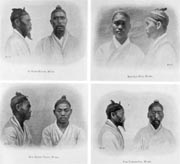 There is much talk of Korea becoming a “multicultural society,” but it seems writers and travelers have seen the Korean people as such for a long time.

In the latter part of the Joseon Dynasty (1392-1897), many Westerners visited Korea for diplomacy, missionary work, trade or exploration, leaving several travelogues on Korea.

Judging from their writings, it seems that Westerners thought that Koreans were in better physical condition than other Asian people. For example, Isabella Bird Bishop, an English traveler, wrote in her book “Korea and Her Neighbors” (1898) that the average height of a Korean male was 163.4 centimeters and that they had a fine physique.

Many of these writers also considered Korea a multiracial country. Philipp Franz von Siebold, a German physician and traveler, wrote in “Nippon” (1832) that Koreans, in their outward appearance, had the features of both Caucasians and Mongolians. Ernst J. Oppert, a German merchant, wrote that Koreans were a mixed race of two different ethnic groups, according to his book from 1880 “A Forbidden Land: Voyages to the Corea” [sic]. Arnold Henry Savage Landor, an English painter, wrote in his book “Corea or Cho-sen” (1895) that Koreans seemed to be comprised of almost all races in Asia.

Although Korean scholars have long promoted the idea that Korea is a single-race nation, many of them are now saying that this idea is false, in part based on the writings of the aforementioned Westerners and visitors.

In fact, it is said that the expression “Korea is a homogeneous nation” was never used before the publication of “The Korean Race Theory,” written by Lee Kwang-soo in 1933. And according to Park Chan-seung, the author of “Nation, Nationalism,” prominent historians such as Sin Chae-ho and Park Eun-sik, who were also independence movement leaders, recognized that Koreans were composed of various ethnic groups in their books on Korean history.

Scholars now say that it was in the historical and political context of Japanese colonization and, later, national division that the idea of Korea as a “homogeneous nation” was born.

Therefore, there is no reason to worry about Korea’s ability to accept the growing influx of immigrants and marriage migrants and their children. Korea has long been a multiethnic society, made up of people of different cultures and ethnic groups.

*The writer is a researcher at the Institute of Body Culture Study, Konkuk University.