Army boss out after reports of iffy property deal

Army boss out after reports of iffy property deal 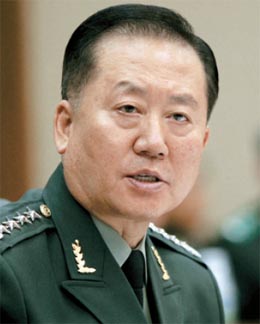 Army Chief of Staff Hwang Eui-don applied for retirement yesterday, according to the Ministry of National Defense, after the media reported that he bought real estate with inside information from the Army. President Lee Myung-bak accepted his resignation, the Defense Ministry said.

“Regarding the reported wealth accumulation process, Chief of Staff Hwang made a decision that it is not proper to keep commanding the Army at a critical time for reforming the Army,” said a ministry spokesman. “He delivered his intention to resign to the president, and the president accepted it.”

Hwang resigned as new Defense Minister Kim Kwan-jin is gearing up for what critics call a long overdue reform of the military to better guard against growing threats from North Korea.

Local papers reported that Hwang was suspected of making huge profits from a real estate transaction using inside information.

The news reports said Hwang purchased a building in Seoul’s Yongsan District, near the headquarters of the Defense Ministry, in August 2002 while serving as spokesman for the ministry. Four months later, the government eased restrictions on building heights in the area, triggering a surge in property values.

The value of the building bought by Hwang rose 3.8 times in the past eight years.

Hwang, formerly vice commander of the South Korea-U.S. Combined Forces Command, was promoted to Army chief of staff in June to replace Han Min-koo, who became chairman of the Joint Chiefs of Staff.

Han replaced Gen. Lee Sang-eui, who retired to take responsibility for the poor military response to the Cheonan sinking in March.

Han has been criticized for the weak response to the recent North Korean attack on Yeonpyeong Island and was rumored to have also submitted an application for retirement. The defense ministry denied it yesterday.

Hwang’s resignation is triggering a big personnel reshuffle among the top brass of the military.

The ministry was initially scheduled to announce a list of officers to be promoted to brigadier general, major general or lieutenant general on Dec. 2, but delayed it after the Nov. 23 shelling of Yeonpyeong Island and the replacement of the defense minister. It was supposed to announce the new generals today.

But according to a military source, because Hwang’s resignation will require a reshuffle of four-star generals, the ministry will cancel the announcement scheduled for today and announce a bigger round of promotions in a day or two.