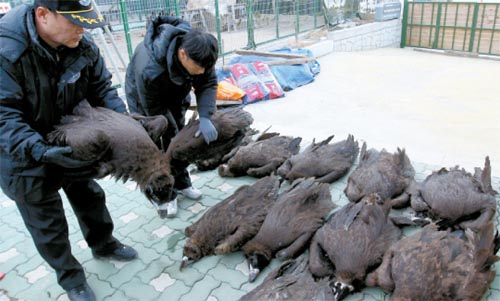 Members of the Korea Association for Bird Protection move a flock of vultures found dead in Paju, Gyeonggi, yesterday. [YONHAP]


A flock of vultures designated as Natural Monument No. 243-1 of Korea were found dead in Paju, Gyeonggi, yesterday morning.

According to the city of Paju and the Korea Association for Bird Protection, 52 vultures were found crumpled in a field in Jeokam-ri, Paju, at about 11:30 a.m. yesterday. Despite efforts to rescue the vultures, 16 died while the remaining 36 birds were taken to a nearby institution for emergency medical treatment. However, more of the birds are likely to die, as most of them are in critical condition.

The accident marks the worst scale of death for vultures since 1997, when 29 vultures in Paju died from toxic substances near the Imjin River.

In order to determine the exact cause of death for the birds found recently, the carcasses were sent for autopsies to the National Veterinary Research and Quarantine Service and the College of Veterinary Medicine at Seoul National University.

Kim Seong-man, president of the Korea Association for Bird Protection, said, “At this juncture, it is hard to determine the exact cause of death. Only after tests we will be able to verify the reason.”

Some people have said there has been insufficient feed in the wintering area around the Civilian Control Zone near the DMZ. About 500 vultures have landed in that area since the end of October. The place is known as one of the vultures’ largest wintering places.

After the North’s shelling of Yeongpyeong Island on Nov. 23, civilian entry to the Civilian Control Zone has been strictly restricted, preventing the bird association from providing the vultures with food.

Earlier this month, about 1.5 tons of pork were delivered to the birds’ wintering place, less than half the amount of feed compared to last year, the association said. But a large-scale feeding event that was scheduled for last Sunday had to be canceled because of the CCZ restriction.