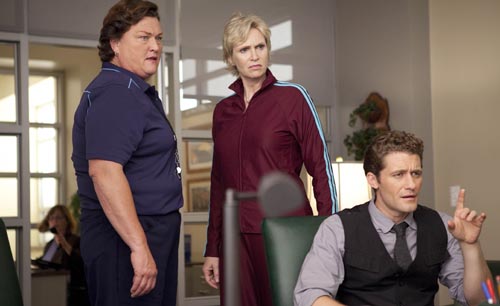 In this undated publicity image released by Fox, from left, Dot Jones, Jane Lynch and Matthew Morrison are shown in a scene from “Glee.” The program was nominated for a Golden Globe for best television series comedy or musical. The awards will air on Jan. 16. [AP/Fox, Adam Rose]


NEW YORK - The Golden Globe nominations in television categories had a familiar feel.

Fox’s “Glee,” which won best comedy or musical in its freshman year, topped all other shows with five nominations and could win best show honors for its sophomore season, too.

ABC’s “Modern Family” won an Emmy as best new comedy a few months ago and was nominated for a Golden Globe, too. Sofia Vergara and Eric Stonestreet were nominated in supporting actor categories.

All the television series and actors who picked up trophies at the Golden Globes ceremony last winter have a chance to do so again in January, according to the nominations announced in Beverly Hills, Calif., on Tuesday.

The tiny AMC network beat all its rivals with two nominations for best drama series: “Mad Men,” which has won this category three years in a row; and this year’s zombie sensation “The Walking Dead.”

Dramas made by broadcast networks were largely overlooked in the nominations. Last year’s winner, Julianna Margulies in “The Good Wife,” and Hugh Laurie of Fox’s “House” were the only two actors in broadcast dramas among the 10 nominees in their acting categories.