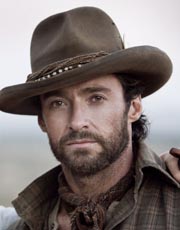 Movie heartthrob Hugh Jackman got a black eye while making a dramatic entrance on Oprah Winfrey’s hit television show on Tuesday, sailing onto the stage by zip line from atop the Sydney Oprah House.

Famous for doing his own stunts in the “X-Men” films, Jackman, 42, burst onto the stage of “Oprah’s Ultimate Australian Adventure” from the top of one of the Opera House sails, zooming over a delighted audience on a harness.

But the stunt went sour when the “overexcited” Jackman said he got distracted by the view and forgot to apply the brakes, slamming into lighting rigging overhanging the stage as he waved to screaming fans.