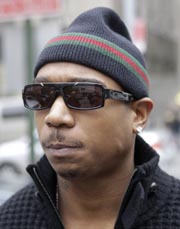 Ja Rule became the latest U.S. rapper to face jail on a gun charge. He pled guilty in New York on Monday on charges of attempted possession of a weapon, prosecutors said.

Ja Rule, whose real name is Jeffrey Atkins, is expected to be sentenced to two years behind bars and 18 months of supervised release after pleading guilty to attempted criminal possession of a .40 caliber handgun. The sentencing is on Feb. 9, 2011, a spokeswoman for the Manhattan District Attorney’s office said.

The rapper was caught with the pistol in his sports car after a 2007 concert in Manhattan.