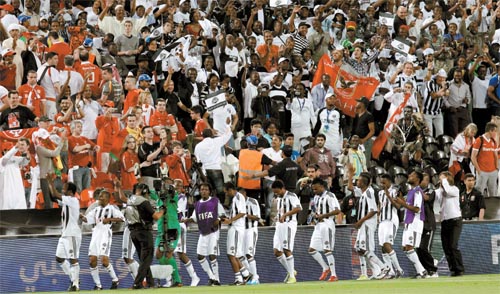 
ABU DHABI, U.A.E. - African champions Tout Puissant Mazembe pulled off the biggest shock in the 10-year history of the Club World Cup by beating Internacional, 2-0, in the semi-finals here on Tuesday.

The side from the Democratic Republic of the Congo prevailed through fine second-half strikes by Mulota Kabangu and Dioko Kaluyituka to become the first team from outside Europe and South America to reach the tournament’s final. Having already seen off Mexicans Pachuca in the quarterfinals, they will now face either European champions Inter Milan or Asian Champions League holders Seongnam Ilhwa of South Korea in Sunday’s decider.

“We believed in ourselves, we were confident and you could see that when we started attacking, especially at the start of the second half,” said TP Mazembe coach Lamine N’Diaye. “We were lucky too, and don’t forget that our goalkeeper was excellent - he was like a magician. But to win 2-0, it’s a day of happiness for us.

“It’s very good for this team and for the Congolese people, and every African should be proud of this team.”

South American champions Internacional, from the Brazilian city of Porto Alegre, were bidding to become the first team to win the competition twice, having already tasted success in 2006. They were, however, routinely frustrated by TP Mazembe goalkeeper Muteba Kidiaba, whose brilliance played a decisive role in one of the most famous results in his club’s history.

“We had lots of great opportunities but unfortunately their goalkeeper was excellent,” said Internacional coach Celso Roth. “It was time for Africa to reach the final and unfortunately it has been at our expense. There’s no dishonor in that - African football is improving all the time and I don’t see anything shameful in losing to an African team.”

Inter’s technical qualities were apparent from kick-off and their inventive approach saw them procure a number of early opportunities. Rafael Sobis twice shot off target before being denied by a brilliant save from Kidiaba, who plunged to his left to deny the former Real Betis forward as he took aim from 10 yards.

Inter defender Indio went close with a header that flashed across the face of the goal, while precise crosses from right-back Nei set up first Tinga and then Matias, neither of whom were able to find the target. The second half was eight minutes old when Kabangu made a breakthrough, skillfully taming the ball inside the Inter box and then steering a half-volley inside the right-hand post with his right instep.

Sobis spurned two chances to equalise for Inter, drawing a smart reaction save from Kidiaba with a swerving strike and then heading over from Andres D’Alessandro’s left-wing center. Roth made two changes in a bid to force a way back into the contest and saw substitute Giuliano bring another splendid stop from Kidiaba with a left-foot effort in the 69th minute.

As the Brazilians pressed forward, TP Mazembe struck in the 85th minute. Kaluyituka picked up the ball wide on the left and bamboozled Pablo Guinazu with a series of step-overs before cracking a low drive into the bottom-left corner from the edge of the box.