McCain to come to Seoul on Sunday

McCain to come to Seoul on Sunday 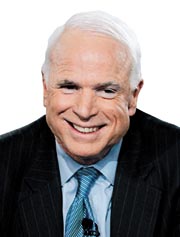 He will stay until Tuesday and meet leaders of the South Korean political and business community in Seoul, the source said.

“Senator McCain decided to come to Korea to reconfirm the solid Seoul-Washington alliance regarding North Korea’s shelling attack on Yeonpyeong Island,” the source said, referring to the Nov. 23 incident.

The source said McCain will also show his support for the recently revised South Korea-U.S. free trade agreement during the visit.

“The visit by McCain, who is a senior member of the U.S. Senate, will remind U.S. senators of the necessity to urgently ratify the [Korea-U.S.] FTA,” the source said.

McCain, the ranking member on the Senate Armed Services Committee, led a Senate initiative to make a resolution on Dec. 2 to condemn the North’s Yeonpyeong attack and support the FTA.

In June, he issued a private statement condemning the North over the sinking of the South Korean warship Cheonan in March.

Pyongyang has denied any role in the sinking.

In May 2008, when vying with then-Democratic candidate Barack Obama to become president, he sent a contributing article to the JoongAng Ilbo, in which he said that he is proud of the U.S. alliance with South Korea and wants to strengthen relations with South Korea.