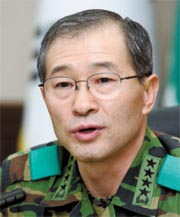 Following the abrupt resignation of the Army chief of staff, Gen. Kim Sang-ki, commander of the Third Army, was nominated yesterday to fill the post, the Ministry of National Defense said yesterday.

Hwang Eui-don applied to retire from his position as chief of staff Tuesday after the media reported that he had invested in real estate based on inside information from the Army. Hwang’s retirement made him the shortest-serving top Army commander in the nation’s history.

“General Kim was selected because of his expertise in the military and his ability to push forward reform,” the Defense Ministry said yesterday. “He was also believed to be the best candidate to improve the morale and discipline of the Army and beef up the troops’ will to fight.”

The 58-year-old general is a native of Pohang, North Gyeongsang. He graduated from the Korea Military Academy in 1976 and served key posts in the military. Before his appointment as commander of the Third Army, he served as deputy minister in charge of policy making at the Ministry of National Defense in 2009.

According to the ministry, Lt. Gen. Lee Hong-ki, the head of military operations headquarters at the Joint Chiefs of Staff, was selected to succeed Kim to head the Third Army. Lee was also promoted to general.

The ministry said the nominations were to be confirmed today at a cabinet meeting. President Lee Myung-bak will formally appoint them in the afternoon.

The ministry will also give the president today a list of officers to be promoted to brigadier general, major general and lieutenant general and announce it to the public. The top brass reshuffle is to be completed by Friday.

The promotions were initially scheduled for Dec. 2 but were delayed after North Korea’s shelling of Yeonpyeong Island last month and the subsequent replacement of the defense minister.

Kim Sang-ki’s promotion quickly drew criticism of regional favoritism. Democratic Party spokeswoman Cha Young said yesterday that chiefs of the Army, Navy and Air Force are all from the Gyeongsang regions. “Kim is even from the same hometown and high school as the president,” Cha said. “It now appears that a military officer cannot be promoted unless he is from the same hometown as the president. This is lamentable.”

A Defense Ministry official dismissed the criticism. “Capability and expertise are the keys,” he said. “A person’s hometown is not a part of our consideration.”

The promotion of Lieutenant General Lee to head the Third Army also faced criticism as he had been criticized for poor performance during the Yeonpyeong Island shelling. “We had enough reviews and reached a conclusion that his performance was appropriate at the time,” the ministry official said yesterday, defending the decision. “He is a man who has special knowledge in operations. We believe he is the best man to maintain the country’s readiness in the current security situation.”