Birthday of Jong-un isn’t cause to celebrate

Birthday of Jong-un isn’t cause to celebrate 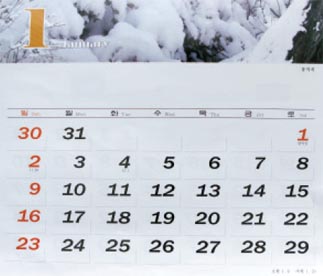 One of the North Korean calendars showing no holiday on Kim Jong-un’s birthday, Jan. 8. [JoongAng Ilbo]

Kim Jong-un’s status as successor to his father, Kim Jong-il, may not be totally secure if evidence from North Korean calendars for 2011 is to be believed.

Two calendars obtained by the JoongAng Ilbo yesterday marked Jan. 8, Kim Jong-un’s birthday, in black. In contrast, Feb. 16, his father’s birthday, is printed in red. The calendars, different in design but both bearing the name of a Pyongyang publishing company, were obtained from Japan.

As in South Korea, calendars in North Korea mark holidays in red. South Korean intelligence officials have determined that Jong-un, the third son of Kim Jong-il, was born on Jan. 8, 1984.

“Kim Jong-un was publicly named successor to his father with his promotion to vice chairman of the Central Military Commission on Sept. 28, but North Korea’s attempt to build a cult of personality around him appears not yet to have been put into full swing,” said a Seoul official.

Kim Jong-il’s birthday was designated as an interim holiday in 1975, a year after he was named his father’s successor at the age of 32.

It became an official holiday in 1976 and was promoted to “public holiday,” or a holiday requiring nationwide celebration, in 1983 when he turned 40. It was designated the country’s most important holiday in 1995, the year after Kim Il Sung died.

Kim Il Sung’s birthday had been designated the nation’s most important holiday in 1974, after Jong-il was named his successor.

Jung Chang-hyeon, North Korean studies professor at Kookmin University, predicted that Jong-un’s birthday would become a holiday in the future. “The North’s leadership appears to believe it’s too early to do so,” he said.

Jin Hi-gwan, professor at Busan’s Inje University, said the North could designate Jong-un’s birthday a holiday right before it takes place next month.