FMD is relentless in its spread

FMD is relentless in its spread

A quarantine truck sprays disinfectant yesterday in Yangju, Gyeonggi, where foot-and-mouth disease was confirmed along with Yeoncheon, Gyeonggi. The contagious viral disease has now penetrated the Seoul metropolitan area. [YONHAP]


The highly contagious foot-and-mouth disease has spread beyond its origin in North Gyeongsang to the Seoul metropolitan region, with two hog farms in Yangju and Yeoncheon, Gyeonggi, confirmed to have the virus yesterday.

The Ministry for Food, Agriculture, Forestry and Fisheries said yesterday that tests conducted by the National Veterinary Research and Quarantine Service on hog farms in the towns of Nam in Yangju and Baekhak in Yeoncheon, Gyeonggi, verified the existence of FMD.

The owner, who manages both hog farms, reported suspicious symptoms. There are about 1,200 pigs at each farm. Quarantine officials stepped in to slaughter pigs and cows within a 3-kilometer (1.8-mile) radius of the farms - about 18,000 heads of livestock at 23 farms were slaughtered. 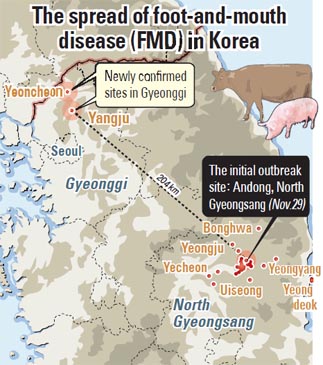 This marks the first case of FMD outside of North Gyeongsang, where the initial outbreak was found in Andong on Nov. 29.

Livestock owners in the area are on full alert. Gong Hyeok-gi, 65, is raising 65 heads of milking cows 1 kilometer (0.3 miles) from the epicenter farms in Yeoncheon, but his farm is exempt because he is at least 500 meters outside the area. Even so, Gong isn’t taking any risks.

“Out of concern, I am carrying out disinfection jointly with villagers as well as monitoring my milking cows.”

As of yesterday, about 150,000 livestock from 850 farms in Korea have been slaughtered, incurring a loss of more than 170 billion won ($146 million). The government expects that the damage will exceed that of 2002, when 160,155 heads were killed, marking the most livestock slaughtered due to the disease.

Im Byeong-gyu, a local official in charge of quarantine, pledged to fully commit to curb the spread.

“Despite the effort being made with disinfection and monitoring, it is a pity that the disease broke out 10 months after [FMD occurred in January in Yeoncheon].

The provincial office said it established 47 quarantine posts from the epicenter, including 34 in Yangju and 13 in Yeoncheon. A total of 440 more people have been hired to conduct disease forecasting, up to 740 from 300.

The government read an emergency statement about the disease yesterday, requesting cooperation from the public. In the statement, the government encouraged tightening up disinfection measures on livestock farms and facilities, along with controlling visitors’ access as well as the management of workers. Gatherings and events at livestock farms should be discouraged. Households that had their animals slaughtered will be able to receive 50 percent of the value of each head of livestock as prepayment to help stabilize the farmers’ lives.