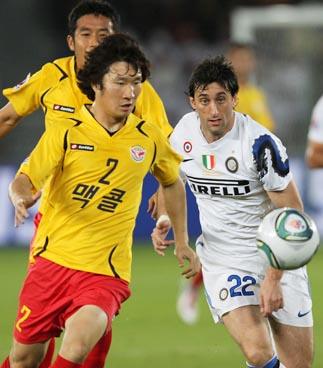 Argentine striker Diego Milito scored one goal and assisted on another upon his return from a five-week absence, as Rafael Benitez’s under-performing side set up a meeting with surprise team Tout Puissant Mazembe in Saturday’s final.

Inter, which last season won an unprecedented treble of Italian league, cup and Champions League titles, were 10 points behind Serie A leaders AC Milan when they left for Abu Dhabi, but they will now be expected to end the year with another piece of major silverware.

Inter welcomed Milito, Julio Cesar and Cristian Chivu back from injury, but Dutch playmaker Wesley Sneijder had to go off after appearing to injure his left hamstring in the first 30 seconds.

Sneijder had barely disappeared down the tunnel when veteran Serbian midfielder Dejan Stankovic put Inter ahead for good.

After Milito was crowded out on the edge of the Seongnam box, Stankovic displayed impressive balance and a cool head to steady himself and then roll the ball into the bottom-right corner with his left foot.

Seongnam was unable to launch an effective counter attack after the goal.

In the 32nd minute, Inter doubled their lead in stylish fashion. Captain Javier Zanetti flicked the ball to Milito and drove into the box before receiving Milito’s expertly directed back-heel and guiding the ball beyond Seongnam goalkeeper Jung Sung-ryong.

Cesar had to be alert to save a Dzenan Radoncic header as Seongnam sought a route back into the game.

But the Brazilian goalkeeper was then beaten by a header from Chu Byung-kuk as he advanced to claim a free-kick, only for the ball to go wide of the post.

Stankovic had an opportunity to put the game beyond Seongnam on the hour, but his attempted pass to Samuel Eto’o - who would have had only the goalkeeper to beat - was cut off by Ko Jae-sung.

Jo Jae-chol gave Inter a mild scare with a shot from a distance that brushed the roof of the net, but the Italian champions were largely able to keep their opponents at arm’s length.

Eto’o was denied by Jung with 17 minutes remaining, but Milito was on hand to stab the rebound into the net and seal Inter’s place in the final.

Seongnam had a superb opportunity to respond shortly afterwards, but when Cesar parried Asian player of the year Sasa Ognenovski’s free-kick straight to Radoncic, the Montenegrin side-footed the ball wide from close range.

Earlier, Mexican side Pachuca hit back from 2-0 down to defeat local representatives Al-Wahda on penalties in the fifth place playoff. Pachuca trailed by two goals with less than 10 minutes to play but Dario Cvitanich claimed a late brace to tie the score and after a goalless period of extra time, the Mexican side prevailed 4-2 on penalty kicks.

The Club World Cup is an annual competition among champions of continental club tournaments. Seongnam reached this year’s tournament by virtue of claiming the Asian Football Champions League trophy in November.

There are seven clubs in the Club World Cup field this year: six champions plus the winner of the top division league in the host country.

Inter Milan, the winner of Europe’s UEFA Champions League, had a quarterfinal bye to advance to the semifinals.

Inter Milan will take on TP Mazembe of Congo in the final on Saturday. The African champion stunned Internacional of Brazil, 2-0, to become the first team from outside Europe or South America to reach the final.

Seongnam will meet Internacional in the third-place match on Saturday morning.

No Korean team has ever advanced into the final match. The Pohang Steelers took third place in last year tournament.