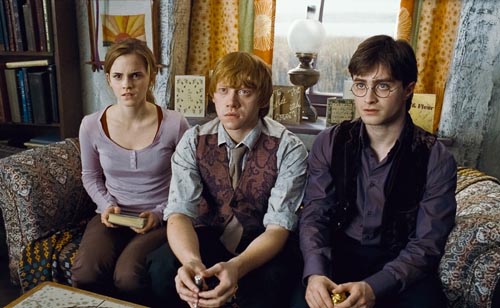 
Fear and loathing, doom and gloom permeate nearly every minute of “Harry Potter and the Deathly Hallows: Part 1,” the beginning of the end of the behemoth boy-wizard series.

This seventh film in the franchise, directed once again by David Yates (who previously helmed parts five and six), begins with nearly suffocating tension, as Harry (Daniel Radcliffe) finds himself face-to-face with his destiny: being the target of the evil Lord Voldemort’s deadly wrath. Friends and allies will have to band together to protect him; some of them won’t make it out alive.

Yates’ film is gorgeously bleak, with sprawling, end-of-the-Earth shots of foreboding mountains and lonely beaches from Oscar-nominated cinematographer Eduardo Serra (“Girl With a Pearl Earring”) that reflect the characters’ moods. Serra has never shot a “Harry Potter” movie before and brings a totally different kind of artfulness to the aesthetics while remaining consistent with this familiar world.

The films have grown darker in tone and theme, and given this heightened emotional challenge, the three young stars again rise to it. Radcliffe has been solid for a while now, and Emma Watson as Hermione Granger has grown into an engaging young woman, but Rupert Grint as Ron Weasley gives his most confident performance yet.

Voldemort is on the hunt for Harry, and has sent his minions to capture him alive so that he can kill him himself. Meanwhile, Harry, Hermione and Ron must track down and destroy the Horcruxes, scattered containers that hold pieces of Voldemort’s soul, which are crucial to Harry’s survival. But this pursuit is more dangerous than ever, since Voldemort’s Death Eaters have taken over the Ministry of Magic, leaving Harry with less protection. And as we know from the previous film, the regal and wise Hogwarts headmaster Albus Dumbledore (Michael Gambon, in brief flashbacks) isn’t around to help him, either.

By the time “Part 1” ends, you’ll be eager to see what tricks Harry has up his sleeve once he is forced to face the ultimate evil.

The film opened Wednesday in Korea.