Works of art from the depths of the Depression

Works of art from the depths of the Depression 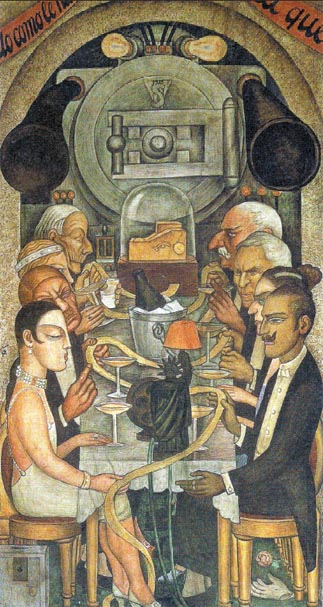 “Wall Street Banquet” (1928) by Diego Rivera. The painting is located on the north wall of the Courtyard of the Fiestas at the Ministry of Education in Mexico City, Mexico.

Although Diego Rivera (1886-1957) is more famous nowadays for being the troublesome husband of the painter Frida Kahlo, who herself was known for being an “unfortunate genius,” he was well known in his own time as one of the three masters who led the Mexican Muralist movement.

Rivera, who studied Italian Renaissance frescos, used colors and forms unique to Latin America to create large-scale frescos on the walls of public buildings. He painted murals to give ordinary people access to art and to remind them of their Latin American identity.

Because murals can be seen by people as they go about their daily lives, muralists tended to use them to deliver messages.

Rivera used his murals to spread his communist ideology.

For example, in his mural “Wall Street Banquet” (1928), Rivera provides a visual critique of capitalism.

In the mural, well-dressed couples sit at a table drinking champagne. However, the expressions on their faces show that they are not happy. Some of them have mean smiles on their faces. Others remain impassive, but their expressionless faces mask a certain tension as they glance at the ribbon of ticker tape that snakes down the middle of the table.

Looming over the long banquet table is a gigantic vault that looks like a sacred altar. Meanwhile, the Statue of Liberty appears as a tiny lamp that provides the only visible light. This could be interpreted as Rivera’s belief that the sublime ideology of freedom is degraded under the laissez-faire policies of the free market, which cause indefinite competition, symbolizing the struggle to survive in an urban jungle.

Rivera completed the mural during Wall Street’s heyday, just before it all went bust in the Wall Street Crash of 1929 that led to the Great Depression.

The stock market had tumbled prior to that, and there had been recessions in the economy, but the Great Depression was the first period of global economic decline. Most experts say that it was brought about by various overlapping factors such as chronic overproduction, the reduction of investment and consumption and the Federal Reserve’s policy of monetary tightening.

Rivera might have rejoiced to see the Great Depression, believing that the capitalism he hated would finally collapse.

Instead, capitalism found a way to survive and eventually became “revised capitalism.”

Some advocates of laissez-faire policy disagreed with this approach, because they believed that spending increases and tighter government regulation would lead to a loss of freedom and capitalism’s demise.

However, the British economist John M. Keynes (1883-1946), who established the theoretical base for this “revised capitalism” said that government expansion would not kill capitalism but would be the “only practical way” to prevent the collapse of companies and entrepreneurship.

Rivera became engaged with America’s new economic policy through the New Deal, which was launched by President Franklin D. Roosevelt in 1933 to overcome the Depression.

The government’s involvement in the market under the New Deal included art and art projects such as the one carried out by the Works Progress Administration, which employed artists to create murals on public property. Works of art produced during this period are commonly called New Deal Art.

The WPA mural project was inspired by the Mexican Muralist movement led by Rivera. Not only did it provide artists with jobs, but it also introduced art to average citizens who rarely had the opportunity to see original artworks. Although the mural project was based on good intentions, the low aesthetic quality of the murals created under the project drew criticism from artists and the public. Today, neither these works nor the artists who created them are famous. 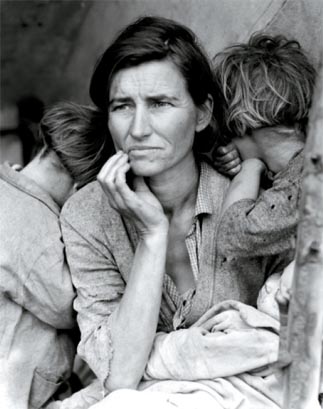 The most recognizable pieces of New Deal Art today came from a documentary photography project run by the Farm Security Administration. The FSA wanted to advertise the need for a social welfare policy for farmers. So they recruited photographers to take photos of farmers in distress. The most famous photographer to emerge from the project was Dorothea Lange (1895-1965), who became famous for her FSA piece “Migrant Mother.” Lange took the picture at a California farmer’s camp on a rainy and cold early spring day in 1936. The woman in the picture is the 32-year-old Florence Owens Thompson.

Lange spoke about the picture in 1960 in an interview with the magazine Popular Photography: “I saw and approached the hungry and desperate mother, as if drawn by a magnet. I do not remember how I explained my presence or my camera to her, but I do remember she asked me no questions. I made five exposures, working closer and closer from the same direction. I did not ask her name or her history. She told me her age, that she was thirty-two. She said that they had been living on frozen vegetables from the surrounding fields, and birds that the children killed. She had just sold the tires from her car to buy food. There she sat in that lean-to tent with her children huddled around her, and seemed to know that my pictures might help her, and so she helped me. There was a sort of equality about it.” 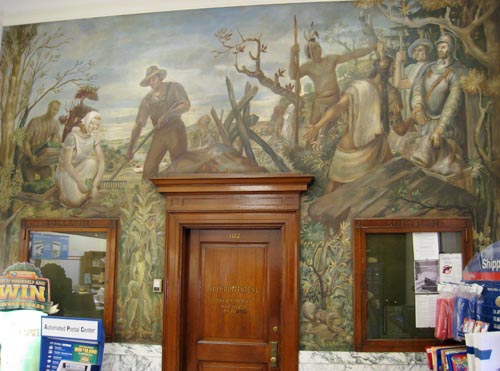 A mural on the wall of the Arlington Post Office in Massachusetts that was created as part of the New Deal.


The photograph had an enormous impact on society. It can even be said that the photo was instrumental in President Roosevelt’s re-election. The picture was a success not only because it drew attention to the need for social welfare policy but also created public empathy for people living in poverty.

Like Lange’s piece, several FSA photos are recognized as works of art rather than just images for advertisements.

However, not all of the public art projects under the New Deal were successful.

I will talk more about that and provide more details about New Deal Art in my next column.