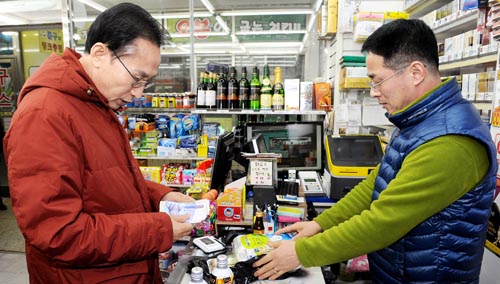 Since North Korea’s shelling on the Yeongpyeong Island last month, the president has largely concentrated his attention on security affairs. Lee had a brief trip to Indonesia and Malaysia last week and attended the opening ceremony of the Busan-Geoje expressway on Monday, but yesterday’s visit to the Smile Microcredit Bank branch in Nowon district of northern Seoul appeared to signal that the Blue House’s attention has returned to the “working class-friendly” policy.

During his morning visit to the branch office of the state-led microcredit program to support low-income households, the president met with some loan applicants and stressed the importance of the business community’s continued support. The Smile Microcredit Bank is operated with donations from the country’s conglomerates and financial companies.

“The business community has cooperated very much on the program,” Lee said, praising the conglomerates’ assistance. “Other countries have microcredit banks, but the interest rates are relatively high.”

Lee also visited a small supermarket in an apartment complex, which received a government subsidy to improve its operation. As many mom-and-pop stores have suffered in their competition against large discount stores, the government has been providing financial assistance to upgrade micro retail businesses.

The president also visited a dry cleaner, pizza store, snack restaurant and beauty salon in the complex and met with owners and customers.

When an interior design shop owner said his business is in crisis due to the sluggish real estate market, Lee held his hands and said, “the market is recovering gradually.”

As the fourth year of his term approaches, Lee has repeatedly stressed the importance of a “working class-friendly” policy.

When the Ministry of Strategy and Finance on Tuesday reported its agenda for the next year to the president, Lee said creating jobs is the most important task for the working class, emphasizing that the government’s five-year growth target is aimed at increasing employment.

He has also urged the Labor Ministry to create good quality jobs, while ordering the Financial Supervisory Service to pay more attention to small companies and micro-business owners next year.